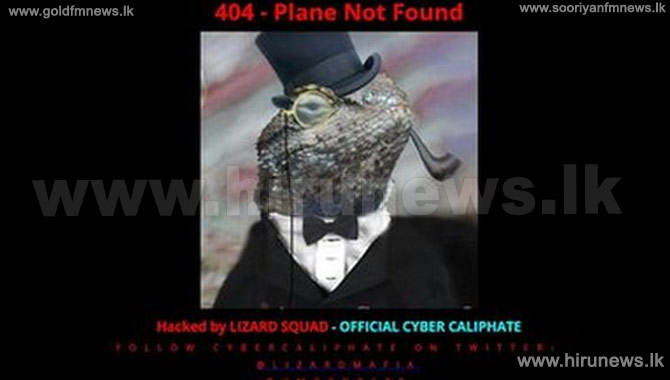 A hacker group, called "Lizard Squad - Official Cyber Caliphate", has hacked the official website of Malaysia Airlines. The page, which is being reinstated, currently shows a photograph of a lizard in a top hat and tuxedo.

Malaysia Airlines said customer bookings and user data were not affected. The airline is still recovering from two disasters; the disappearance of MH370 and shooting down of MH17.

It is not clear why Malaysia Airlines has become the target of a cyber-attack, especially calling a group itself as “Lizard Squad - Official Cyber Caliphate".

On the main page of the airline's website appear the words "404 - Plane Not Found" and "Hacked by Lizard Squad".

Earlier the browser tab displayed that "ISIS will prevail", but that was detached.

The group claimed on Twitter that it would release data from Malaysia Airlines without specifying what information it might have.


Malaysia Airlines, the national carrier, verified in a statement that it’s "Domain Name System (DNS) has been compromised where users are re-directed to a hacker website".

But it clarified to customers that its web servers were intact and its website had not been hacked.

In March last year, flight MH370 disappeared from radar and is believed to have crashed 1,800km (1,100 miles) off Australia's west coast. A few months later MH17 was shot down over Ukraine, killing everyone on board.


The hacker group Lizard Squad previously claimed to have disrupted Sony and Microsoft operations, with gamers unable to log on to XBox Live and PlayStation platforms over Christmas.
(BBC)