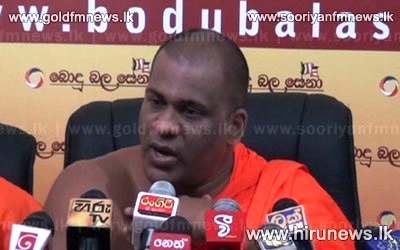 Bodu Bala Sena (BBS) a hardline Buddhist organization today requested the Government to appoint a common front encompassing of all parties to reveal narcotic dealers in the country.

The general Secretary of BBS Ven. Galagodaaththe Gnanasara Thera stated that they would welcome any good changes taking place in the country and they would commit their support for those changes.

Adding further, he stated that BBS held a meeting at Kolonnawa last year and there were about five drug dealers among those who were already actively engaged in politics and the Government should now grill them.

The Bodu Bala Sena (BBS) insisted the Government to take necessary steps immediately against all narcotic dealers and expose the names to the public to protect the youth.

Further he asked the government to instigate a special query in front of schools as some drug dealers are selling drugs mixing up with betel and other things.