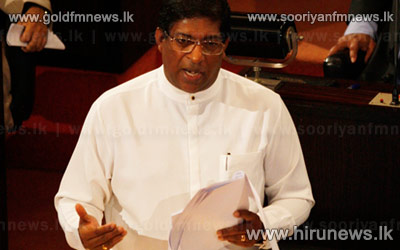 The new government has decided to increase the public worker’s salary by 10 thousand rupees and drop prices of 10 essential goods.

Prices of cement, kerosene and LP gas have also been reduced.

While presenting the interim budget to the parliament, Finance Minister Ravi Karunanayake stated that Samurdhi allowance has been doubled, and requested the private sector to increase its worker’s salary by at least Rs. 2500.

In the interim budget, 15% interest has been given to the fixed deposits of Senior Citizens while Mahapola scholarship allowance has been increased up to Rs. 5000.

The marriage registration fee has been dropped from Rs. 5000 to Rs. 1000 while Rs. 250 and Rs. 200 have been granted to pre-school teachers and Sunday school teachers respectively.

The Finance Minister further said that the entrepreneurs who would invest in the provinces be given a tax concession of 50% on their profit. He also said that steps would be taken to retrieve the GSP plus and to lift the EU ban on fisheries products.

The new government has also increased the decentralized budget for minister from Rs. 5 million to Rs. 10 million while the budgetary allocations for education to be increased to 6%.

Meanwhile Sri Lankan Airline is to be merged with Mihin Air and to cut the estimated expenditure for the President Office 2015 from Rs. 95.93 billion to Rs. 2.56 billion.

The government has decided to cancel Deyata Kirula exhibition but to allocate some money to carry on the proposed development in the area.

At the same time, the Finance Minister has proposed to open a bank account for each citizen in the future.

He said that the government has planned to charge a tax of Rs. 1 billion from Casino permit holders by next April.

In addition, broadcast channel established to solely telecast sports would be charged a one-time tax of Rs. 1 billion and other satellite services with over 50,000 subscribers would also be charged a tax of Rs. 250 million.

In addition, kerosene price has been dropped by Rs. 6 while the price of a cylinder of LP gas by Rs. 300, bag of cement by 90 rupees, bus fare by 10%, and school van fee by 5% would also be reduced.

The current 25% reload tax would have to be borne by respective phone companies hereafter and interest charges for pawned gold jewelry up to the value of 1 million rupees would also be waived.

The farmer loans up to Rs. 100,000 would be cut off by half, where NRFC accounts would be given a 15% interest under the new budget proposals.

In addition, the government has decided to continue the fertilizer allowance under better standards.

A special insurance scheme has been introduced for the fishermen while the tax on small vehicles has been reduced by 15%.

Finance minister Ravi Karunanayake said that the tax system would be simplified and the Paye Tax limit has been increased from Rs. 600,000 to Rs. 750,000.

03)  Actual figure of Debt Per capita is Rs. 427,220, and the actual figure of National Debts Hidden by previous regime currently stands at Rs. 8.81 Trillion.

06)  All loans taken during the previous regime has to be paid by new government to which includes 15 million USD loan taken for security purposes.

07)  Rs. 2.5 billion saved by downsize on the number of Ministers

11)  15% interest rate to be given to Senior citizens with Rs. 1 million in their bank accounts.

14)  To advance agricultural sector, hand tractors will be given away at discounted rates.

17)  An amount of Rs. 2000 billion to be allocated to the fund kept for kidney patients

19)  Kerosene reduced by another Rs. 6 per liter

20)  Electricity consumers will be encouraged to use solar power to save the irrelevant expenditures.


23) Gold jewelry pawned to banks and pawning centers- that don't exceed Rs. 200,000, the interest will be waived off.

25) Mansion tax - Rs. 1 million per year will be charged for houses of which the value is estimated at Rs. 100 million. Vehicle taxes reduced for vehicles with engines below 1000 CC by 15%.

29) The liquor shops per owner to be reduced up to three and the Liquor permit to be amplified by two folds.

34) The government has cancelled the 25% tax paid by customers when reloading mobiles.

35) Rs. 1.5 million license fee will be charged from any vehicle importers.

36) Special privileges for disabled soldiers – under Viru Diriya to be introduced in state banks and the maximum borrowing Rs. 500,000.

42) Public transportation costs to be reduced by 50% for senior citizens in the country.

43) Special committee to be set up to solve the issues caused by irregular finance bodies within a very short time period.

44) Prohibition imposed on Ministries and every state institutions from publishing promotional newspaper advertisements.