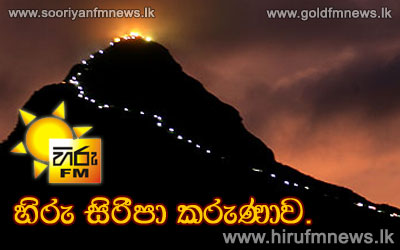 All arrangement are in place for “Hiru Siripa Karunaawa”, the grand pilgrimage organized to pay homage to the Buddha’s Sacred Footprint.

Hundreds of Hiru FM listeners throughout the country would join this pilgrimage organized by Hiru FM.

Hiru FM would pick up pilgrims from 6 major towns this morning and transport them to ascend the sacred hill.

Hiru FM has made all arrangement to provide them with necessary facilities during the journey.

The bus which starts from Matara Bo Tree would pick up pilgrims from Goda-gama, Galani-gama, Horana, Ingiriya and Avissawella before it reaches Nallatanniya.

Another bus which starts from Sri Sasanalankara Temple of Kuliyapitiya would pick up pilgrims from Kurunegala, Mawathagama, Katugastota, Kandy and Peradeniya.

4 other buses carrying pilgrims from Jayanthi Temple at Anuradhapura, Sri Sunandaa-ramaya of Medagama in Gampaha, Hunupitiya Ganga-ramaya in Colombo and Mutiyangana Ancient Temple of Badulla would reach Nallatanniya to join their counterparts.

In addition, floats carrying sacred 8 requisites offered to the Bhikkus would lead the buses during the pilgrimage to enable the onlookers to pay homage and make offerings.