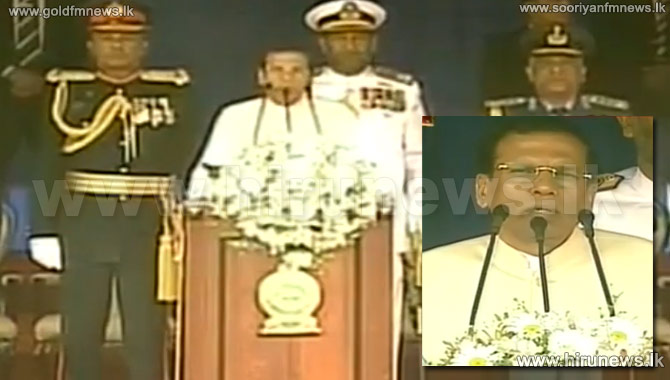 According to our correspondent, they were followed by President’s Secretary, Western provincial council chief minister, Western province governor, Minister of Home Affairs also attended the occasion.

President Maithreepala Sirisena was welcomed by the Prime Minister and the Minister of Home Affairs.

Many state ministers and MPs, the opposition leader, opposition MPs and foreign dignitaries graced the occasion.

Following a 2 minute silence to commemorate the heroes who sacrificed their blood, sweat and tears for the country, 21 gun salutes were accorded in honour of the President.

Expressing his views during the occasion, the President recalled historical account the struggle for freedom

The President also stated that the challenge of the present era is to take the country forward as a people-friendly nation while creating reconciliation among people in the North and south.

President Maithreepala Sirisena further reiterated that the main aim of the new regime is to eliminate poverty.

The President also stated that they will take measures to obtain the support of the international community through a moderate foreign policy.

The independence day parade was held thereafter with the participation of 6000 persons representing the three forces, police, civil security, cadets and the youth corps.

The parade also included a special cultural segment comprising representatives from all races.

Celebrations were held in many parts of the island in conjunction with the Independence Day.