"This year the whole world is celebrating with Sri Lanka" 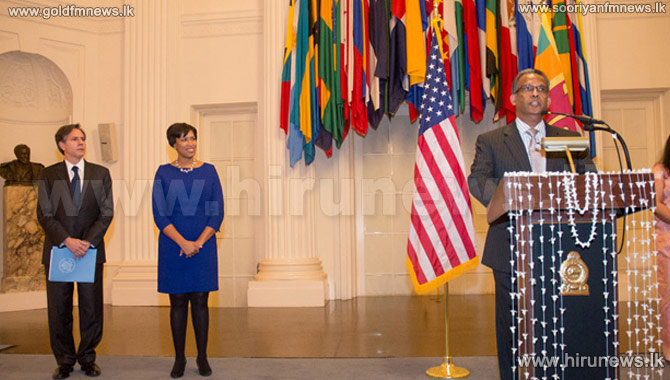 Addressing a large gathering, including the Mayor of Washington DC Muriel Bowser, who had all come together to celebrate Sri Lanka’s 67th Anniversary of Independence at the Reception organized by the Sri Lanka Embassy in Washington DC, Deputy Secretary of State Antony Blinken stated that “this year the whole world is celebrating with Sri Lanka.” He went on to say that “After the most successful election in Sri Lanka’s history, Sri Lankans can stand proud alongside Americans as keepers of the democratic dream” and that it is time for Sri Lanka “to return to its rightful place as a respected member of the international community.” To the applause of Sri Lankan Americans, the Washington diplomatic community and senior US government officials present on the occasion, he concluded his remarks by saying that “We are proud to celebrate your anniversary, we are proud to stand with you in the promise of a new day.”

Welcoming the gathering at the start of the evening’s proceedings, Ambassador Prasad Kariyawasam said Sri Lanka is celebrating 67 years of independence at a momentous time in her history, just less than a month after a presidential election where the people of Sri Lanka reaffirmed their faith in democratic principles and governance. The presence of Deputy Secretary Blinken and Mayor Bowser on this important day for Sri Lanka, especially at a unique and decisive time for the country, is a manifestation of the goodwill and friendship of the United States towards Sri Lanka and a singular honour to its people and leaders as well as Sri Lankan-Americans living in the United States, the Ambassador said. Ambassador Kariyawasam recalled the long years of friendship that Sri Lanka shared with the United States. He added that Sri Lanka looks forward to strengthen bonds of friendship and cooperation with the United States on the basis of our shared values, our commitment to democracy, good governance and to international peace and security.

The Ambassador read out the Government’s collective pledge to peace, which was applauded by the audience and Deputy Secretary Blinken remarked it “was an important step towards healing [the] country’s wounds.”

In the morning of 4 February, the Ambassador and the Embassy staff hosted the traditional Independence Day ceremony at the Embassy premises with multi-faith religious observances conducted by religious dignitaries representing the Buddhist, Hindu, Christian and Islam faiths and in the presence of representatives of the Sri Lankan community in Washington DC.