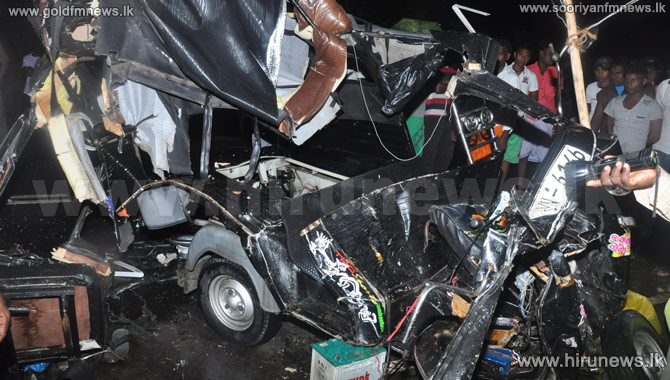 Two youths were killed in a vehicle accident that took place this dawn at Maggona in Beruwala on the main Galle – Colombo Road.

Police Media Spokesman’s office said that another youth seriously injured in the accident had been admitted to the Nagoda hospital.

The accident had taken place due to a collision of two motorbikes and a bus.

The two youths killed were residents of Munghena in Maggona.

Meanwhile five out of six persons traveling in a three-wheeler were killed when a bus and the trishaw collided against each other at Palle-malala in Hambantota last afternoon.

This accident took place as a result of an SLTB bus proceeding from Hambantota bound for Kataragama clashing against the three-wheeler last afternoon.

Another four-year old girl injured in the accident was admitted to the Hambantota hospital.

The persons who met with the accident are members of two related families resident in Palle-malala in Hambantota.