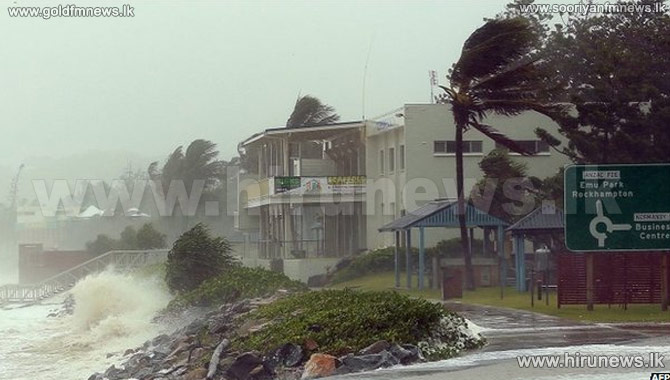 Two major storms have slammed into Australia, bringing winds that have knocked out power to homes and forced evacuations in coastal areas.

Arriving as a Category Five storm, it has now been downgraded to a Three but forecasters are warning of heavy rain and abnormally high tides.

Lam, which arrived as a Category Four, struck Elcho Island and is moving south-west. Local residents said roofs had been torn off from a number of houses and trees uprooted.

There have been no reports of injuries there, and the storm was later downgraded to Category Two as it continued moving inland.

In its latest update, Australia's Bureau of Meteorology (BoM) said Marcia was expected to move south and gradually weaken.

"The very destructive core... with gusts to 205 km/h (127mph), is currently impacting the Yeppoon and Rockhampton areas," it sa Principal Nick Scully told the BBC that about 220 students had left the school on Thursday to travel home to their families but another 40 boys, mostly from the Torres Strait Islands in northern Australia, remained at the school.

About 350 local residents are sheltering in the school's chapel.

"The winds are starting to pick up, there are some thumping noises and the trees are being pushed down," said Mr Scully.

"But it has not hit that freight train-like noise [some cyclones get] so I think we are a little way away from the worst," he said.

The mayor of the nearby town of Rockhampton, Margaret Strelow, told ABC Radio that Marcia was like "a real moving beast" as it appeared to head first to the west of the city and then to the east.

Further south, local media reported that 90,000 sandbags had so far been handed out across Queensland's major city, Brisbane, because of predictions of heavy rain and flooding.

Describing the cyclone as "very serious", Prime Minister Tony Abbott said: "Let's hope we can get through it... without any loss of life."

Destructive winds were expected to extend further south and inland across the Capricornia and Burnett districts, it added.

Local residents should be prepared for an evacuation if advised by the authorities, the BoM added. It also warned about possible tidal and flash flooding.

Queensland Premier Annastacia Palaszczuk said there had been no reports of injuries to people but some reports were coming in of minor structural damage to homes and uprooted trees.

Ms Palaszczuk said 33,000 residences were without power in the Livingstone/Yeppoon area and 20,000 in Rockhampton.

More than 170 schools and child care centres have been closed, and people evacuated or moved to safety on both Lady Elliot Island and Heron Island, on the Great Barrier Reef.

In Yeppoon, about 870 homes were evacuated because of storm surges, according to Queensland emergency authorities.

Images from the area showed uprooted trees and houses with walls or roofs blown off.

St Brendan's College, a Catholic day and boarding high school in Yeppoon, is being used by emergency services as one of the evacuation centres for local residents. (BBC)