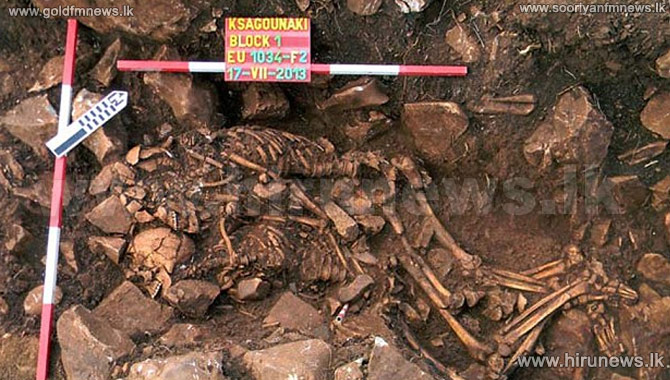 The remains of a man and woman were found in the Diros Caves, Greece

Analysis has revealed the bones date back to around 3,800BC

Couple are believed to have been buried together in their twenties

Experts believe hundreds of people lived inside Alepotrypa before the entrance collapsed burying everyone alive 5,000 years ago

This may have sparked myths about the Greek god Hades, said exerts


In 3,800BC a young couple were buried together in a final embrace that was hoped to keep them together for all eternity.

Now the remains of the man and woman - who are said to have died in their twenties - have been uncovered in the Diros Caves in the Peloponnese region of Greece.

An archaeologist leading the excavation of the ‘underworld’ cavern described the find as ‘stunning’ and said it is possibly the oldest grave ever found in the country.

The remains were initially unearthed in 2013 and have now been analysed using radiocarbon dating.

The results of the analysis showed the bones belonged to a man and a woman, both aged between 20 and 25, dating back almost 6,000 years.

During the 1970s archaeologists, led by Giorgos Papathanassopoulos, began excavating the site.

Experts believe hundreds of people lived inside Alepotrypa before the entrance collapsed burying everyone alive 5,000 years ago.

It has previously been linked with myths about the Greek underworld god Hades.

Over the years, archaeologists have found tools, pottery, silver and copper artefacts in the cave said to date back to the Neolithic Age.

The cave was also used as a cemetery and for burial rituals, and this in particular led researchers to believe it inspired the legend of Hades' underworld.

In Greek legend, Hades was the King of the Underworld, a hidden kingdom of the dead, also referred to as Hell.

This included The Acheron, (river of woe), The Cocytus (river of lamentation), The Phlegethon (river of fire), The Styx (river of unbreakable oath by which the gods swear), and The Lethe (river of forgetfulness).

Once across the rivers an adamantine gate, guarded by Cerberus, forms the entrance to the kingdom.

He was said to be a greedy god and presided over funeral rites and defended the right of the dead to due burial.

‘The embracing couple is possibly the oldest grave to have ever been found,’ said Mr Papathanassopoulos.

The researchers do not know how the couple died, but the fact they were buried together in this way suggests they died either at the same time, or during a similar time frame. (Daily Mail)