Tourist who fell off the World's End rescued 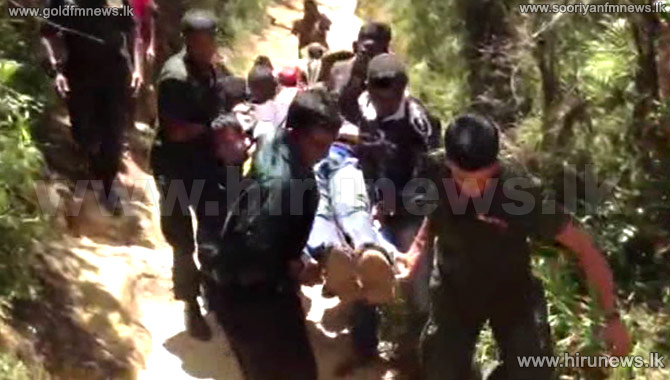 The Dutch national who visited the World’s End this morning with his wife had suddenly fallen off the cliff when he attempted to capture a photograph.

However, Air Force media spokesman Wing Commander Gihan Seneviratne told our news team that the victim, who slid down 50 meters below, had got stuck on a tree and was later found hanging on a branch.

The air force took immediate measures to rescue the Dutch national by sending a Bell 212 Helicopter.

However, due to strong winds and the obstacles in the victim’s position, the helicopter was sent to Diyatalawa camp to bring an army troop to the location.

The Deputy caretaker of Horton Plains Sameera Bandara stated that a group of persons including army soldiers and police officers joined the rescue mission.

He added that a soldier attached to Nuwara Eliya army camp climbed own the precipice using a rope and rescued the Dutch national and later admitted him to Nuwara Eliya General Hospital.

The Director of the hospital, Doctor Aruna Jayasekara stated that the condition of the victim is not critical.

According to the police, the 35 year old Dutch National named Mamitho Lendas and his wife has visited Sri Lanka 6 days after their wedding.

A Netherland national holidaymaker who fell off the World’s End in Nuwara Eliya was rescued this morning, Sri Lanka Air Force Spokesperson stated.

SLAF Spokesperson stated a helicopter was deployed at the scene and the Chinese tourist was airlifted safely to the Bandarawela Hospital.

The tourist had survived as he had been hanging off a rock face at the time he was rescued, reportedly.