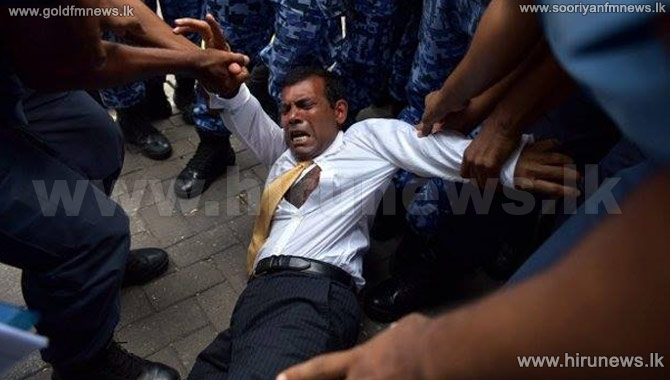 Criminal Court on Monday evening ruled that opposition leader and former Maldivian president Mohamed Nasheed was to be kept under police arrest until end of trial.

The ruling came during the first hearing on the trial held at 4:00 pm which was presided over by Judge Abdulla Didi, Judge Abdul Baaree Yoosuf and Judge Shujau Usman.

The Maldivian Democratic Party (MDP) leader has been charged with terrorism along with key members of his administration for wrongful detention of Criminal Court Chief Judge Abdulla Mohamed three years ago – during his term as president.

Tempers flew high amongst protesters gathered outside the courthouse when saw President Nasheed fall to the ground and be forcefully dragged to court by police with his shirt torn open.

President Nasheed was seen limping into the courtroom with some buttons missing from his shirt. When questioned by Judge Abdulla Didi, he replied that he had not wanted to go inside without any of his lawyers present. He also said that police had injured him when they brought him into the courthouse, and that his arm was broken.

President Nasheed said that police had ordered him to button his shirt on the way to the courtroom, and had later asked him to put on a t-shirt – which he could not do because of his broken arm.

He requested that he receive medical attention before proceeding with the hearing, to which Judge Abdulla Didi replied that he had information President Nasheed staged the fall, and that hearing had to be delayed because he refused to enter the courtroom.

Judge Abdulla Didi proceeded with the hearing promising to make it short, ending the hearing with the order to police to keep him under arrest for reminder of trial and provide him with necessary treatment.

The next hearing scheduled at Criminal Court is that of Tholhath Ibrahim Kaleyfaanu who’s hearing started soon after President Nasheed’s hearing ended. He denied all charges against him and was provided with three days to appoint a defence lawyer. The judge has not ordered that he be kept under arrest until end of trial. (Haveeru online)