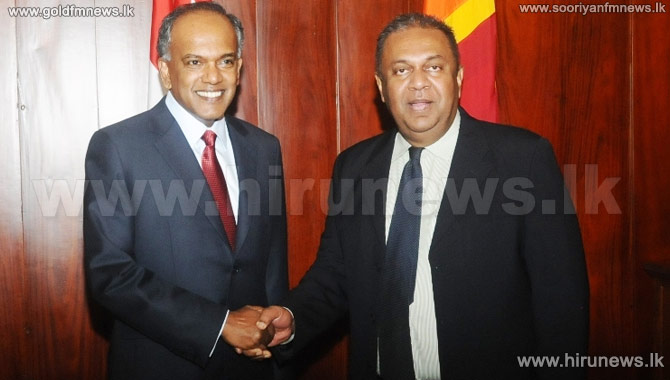 The visit, marking the first high-level interaction of the Singapore Government with the new Sri Lankan Government, since it assumed office last month, demonstrates the keenness of Singapore to reinforce and reaffirm the continuity of the close and robust bilateral relations between the two countries.

Minister Shanmugan characterized Singapore’s relations with Sri Lanka as a friendship that was “constant.”

Minister Samaraweera welcoming his Singaporean counterpart expressed Sri Lanka’s sincere appreciation for Singapore’s steadfast support for the country’s reconciliation process, which was among the top priorities of the new Government in its 100 day work programme.

As two countries that have sought to model their economies and societies on the progress achieved by the other at different stages of their development history, the visiting Minister commended the initiatives of the new Government on national reconciliation and revitalization of the democratic processes in the country, including the credibility and stability of its institutional framework.