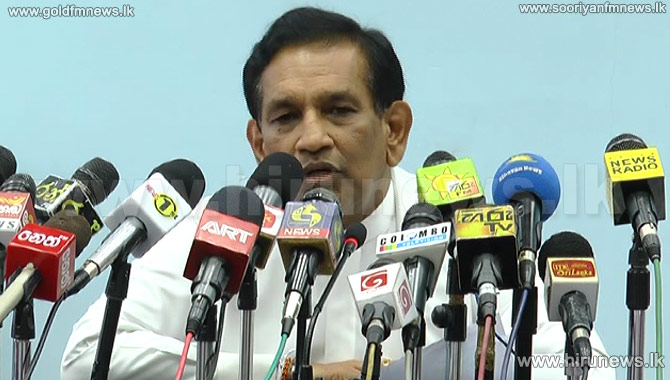 The Cabinet Spokesman Minister Rajitha Senaratna said that the government should face an election only after fulfilling the promises given to the people.

Addressing a media conference to inform Cabinet decisions held at the Department of Information today, Minister Senarathna said that the draft bill to amend the constitution including the change of electoral system would be presented to that parliament next March.

Minister Rajitha Senaratne stated that he’ll be at a disadvantage if the electoral system was changed, since the seat is more favourable to the UNP.

He added that what’s important to the people is not the election, but fulfilling the pledges made by the government.

The parliament can remain for 2 years following an election.

He also said that people will not complain for exceeding the 100 days, if the government can change the presidential system, the parliament system and appoint relevant independent commissions.

Meanwhile, journalists questioned the Cabinet Spokesman about the allegations made by former Minister Wimal Weerawansa, stating that his wife was arrested on political vengeance.

In response, Minister Rajitha stated that the passport is similar to the identity card and that they have made changes to the ages entered in the birth certificates of their first two children.

Minister further said that she has presented 2 passports and 2 identity cards to obtain loans among other benefits.

Meanwhile, the Cabinet has approved the recent Interim Budget proposal to increase the Samurdhi allowance by 200%.

At the same time, Cabinet approval has been given to appoint a special committee to inquire into the complaints regarding post election violence.

The committee comprised of experts in the field of law, administration, finance and investigation will present their report to the Cabinet within 60 days.

In addition, the Cabinet approval was given for printing text books for the next year to state institutions including Associated Newspapers of Ceylon Limited, State Printing Corporation and the Government Printer’s Department.