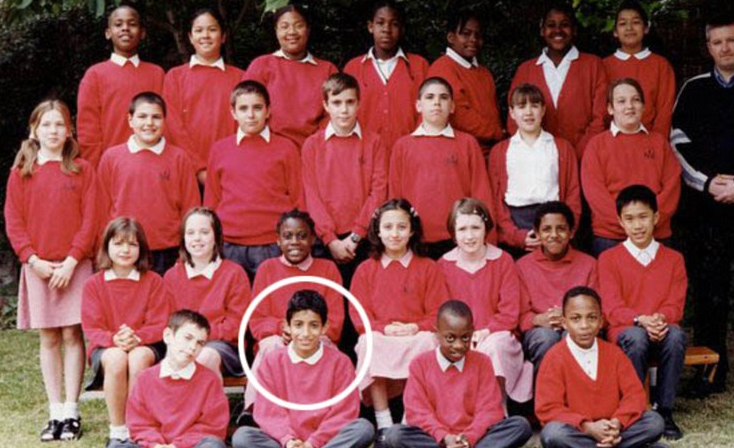 He was born in Kuwait, but moved to Britain with his family at the age of six

He was on a terror watch list, but managed to flee to Syria in 2012

It is believed MI5 and police had come into contact with him 12 times...but blunders let him escape

Smiling at the camera with his church school friends, there is nothing to link this middle-class schoolboy to the merciless terrorist butcher Jihadi John.

Arriving in Britain when he was six years old, Kuwaiti-born Mohammed Emwazi appeared to embrace British life, playing football in the affluent streets of West London while supporting Manchester United.

Neighbours recalled a polite, quietly spoken boy who was studious at his Church of England school, where he was the only Muslim pupil in his class.

The son of a Kuwaiti minicab driver, young Emwazi arrived in Britain speaking only a few words of English, and appeared more interested in football than in Islam.

He went to mosque with his family, who spoke Arabic to each other, but wore Western clothing and became popular with his British classmates at St Mary Magdalene Church of England primary school in Maida Vale, West London.

Former schoolmates were yesterday struggling to believe that the quiet boy they knew had been unmasked as the world’s most notorious terrorist.

In a chilling twist, in a school yearbook from when he was 10, Emwazi lists his favourite computer game as shooting game "Duke Nukem: Time To Kill" and his favourite book as "How To Kill A Monster" from the popular children's Goosebumps series.

He also lists his favourite band as pop group S Club 7, and when asked what he wants to be when he is 30, writes: 'I will be in a football team and scoring a goal.'

His role as Islamic State’s sadistic butcher was a far cry from the football-mad schoolboy who moved to Britain from Kuwait with his parents in 1993.

Given a council flat overlooking the Regents Canal in the exclusive Little Venice area of West London, his father found work as a minicab and delivery van driver while mother stayed at home with Mohammed and his two younger sisters now 25 and 23.

Three more children followed, all born after the family settled in Britain, and the family were said to be close, with both parents arriving at the school gate each day to collect their children.

His family are not being named to protect their privacy.

Former classmates at St Mary Magdalene said Emwazi had got into occasional fights after school assemblies, but said he was usually reserved and dedicated to his religion.

One former classmate said: ‘It was a Church of England school and he was the only Muslim in our class. One time we had an RE lesson and he got up and talked about his religion.

‘He wrote Arabic on the board to show us what it looked like and how it went in the other direction. He showed us a religious text and spoke about what his religion was about.

‘That was when we were eight or nine. He mentioned fasting. His English wasn’t very good throughout primary school. He could only say a few words at first – like his name and where he was from.

‘He played football every lunchtime and at the after-school football club. Through football, he learned different words and expressions. Like all the guys, he always wanted to be the striker.

‘He wasn’t so good in school, he was the bottom half of the class, but he was one of the sporty guys. He was popular.’

After finishing primary school in 1999, young Mohammed moved to Quintin Kynaston Community Academy, in St John’s Wood, where he is believed to have studied alongside former X Factor judge and pop star Tulisa Contostavlos.

Once there, he became more observant of his religion and began wearing more traditional Islamic dress, and his sisters began to wear the hijab.

One younger sister, now 19, was a prefect at the school and completed a detailed ‘murder mystery’ film project about a female serial killer.

Teachers said Mohammed was still ‘diligent, hard-working…everything you would want a student to be’ and neighbours said he was ‘like any other teenager’.

It was only after he won a place studying computing at the University of Westminster that his behaviour began to change.

The university has since been linked with several proponents of radical Islam, and Emwazi appeared to have fallen under their sway.

He began attending different mosques and was known to associate with Bilal el-Berjawi, who was killed by a drone strike in Somalia three years ago. (Daily Mail)