Update: Why his first interview given to Hiru TV: PM Ranil in Parliament - Speaker is requested to hold an inquiry over the allegations made by Sirasa 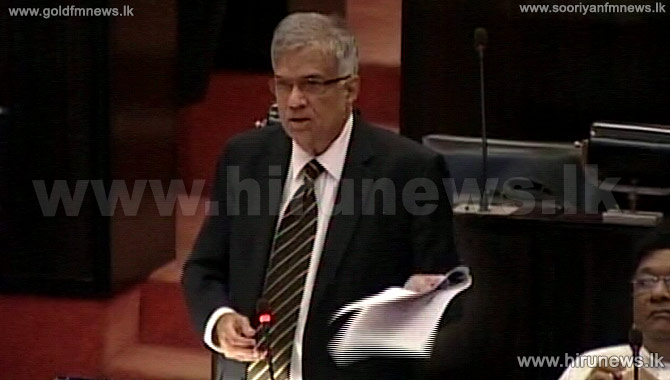 Prime Minister Ranil Wickremesinghe requested Speaker to hold a swift inquiry into the allegations made against him by various television channels for giving his first interview to Hiru TV after assuming duties.

Addressing parliament the Premier said that his rights and privileges have been breached due to these allegations.

The Prime Minister stated that this was not raising a one-time opinion, but a campaign to create an opinion.

He added that during the Presidential election, 3 television channels requested to hold interviews with him, where he offered the opportunity to Hiru TV according to the order.

Prime Minister Ranil Wickremesinghe also stated that he will always stand by the rule of law and the independence of the judiciary and that he will not stray from the path of achieving good governance.

Concluding his explanation, the Prime Minister further said that they intend to establish not only a disciplined government, but a disciplined culture as well.

Drawing to the attention of Speaker about certain opinions raised by a particular media institution for giving the first interview to Hiru TV after he was appointed the Prime Minister, Premier Ranil Wickremesinghe made a statement in parliament today.

Prime Minister Wickremesinghe said that 3 Television channels requested him interviews during the Presidential election, and he gave them on first come first basis.

He told in parliament that the first interview was given to Hiru TV, and other channels would also be given interviews in the cause of time accordingly.

The Prime Minister said that one of the moderators of Sirasa TV referred to him and stated directly on a live program that he is taking action to defend parliamentarian Dumindha Silva who is currently facing certain allegations.

The Prime Minister’s statement quoted the moderator saying that Prime Minister Wickremesinghe is involved in a deal with Hiru Establishment.

He further said that another female reporter attached to the Sirasa Channel questioned Minister Rajitha Senaratna in the same line of opinion during the media conference held to inform the Cabinet Decisions.

The prime Minister said that it is not fair to call it a deal with Hiru TV when steps have been taken to give interviews to television channels on first come first basis.

Electronic medias are engaged in a competition and consequent to this, different channels try to lead the way before others.

The Prime Minister said that he would not influence the matters which are in the hand of law.

He also reiterated that he would always stand for the rule of law as well as the independence of Judiciary.

He further pointed out that merely because some allegations are made against a person, he or she should not be named as a convict.

Prime Minister Wickremesinghe also said that he would never slip away from the endeavor to cement good governance in the country.

The Prime Minister also stated that by making such allegations, they are trying to hinder his duties, and breach his rights and privileges as a parliamentarian and the prime Minister.

Such an act is punishable by the law.

Therefore, the Prime Minister requested the Speaker to hold an immediate inquiry regarding the matter.

The Prime Minister also stated that Sirasa TV and its host will receive an opportunity to find if the allegation is true or false following the inquiry.

Prime Minister Ranil Wickremesinghe added that he is aware that there are obstacles to the government’s move towards building good governance, and assured that he would certainly establish Maithree governance disregarding these obstacles.

Prime Minister concluded saying that they intend to create a disciplined government which will eliminate bribery and Corruption as well as a disciplined culture in the country.