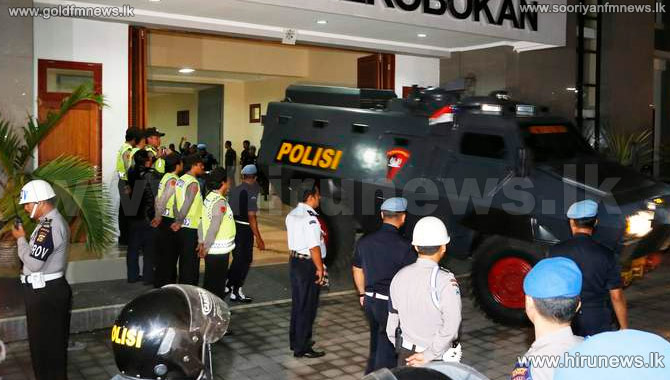 Two Australian men convicted of drug smuggling in Indonesia have been taken from a prison in Bali to an island where they face execution by firing squad.

Myuran Sukumaran, 33, and Andrew Chan, 31, were found guilty in 2005 of being the ringleaders of the so-called "Bali Nine" drug smuggling gang.

They were sentenced to death the following year.

The case has heightened diplomatic tensions between the two countries with Australian Prime Minister Tony Abbott saying he was "revolted" by the planned executions.

The two Australians were reported to be in one of two armoured vehicles that left Kerobokan Prison before dawn on Wednesday, amid a major security operation involving hundreds of police.

They were taken to Bali's airport for the flight to the island of Nusakambangan, where executions are carried out at its maximum security prison.

The pair are among 11 prisoners due to be shot by firing squad, mostly for drug crimes.

The Australian government has stressed that Sukumaran and Chan have been rehabilitated in prison, where they had mentored younger inmates.

Australian Foreign Minister Julie Bishop has said Canberra would consider recalling its ambassador if the executions went ahead, as Brazil and the Netherlands did after executions in January, the first since Mr Widodo came to power.

Six prisoners, including five foreigners from the Netherlands, Brazil, Malawi, Nigeria and Vietnam, were shot by firing squad in January.

Mr Abbott said: "I think there are millions of Australians who feel sick to their stomachs about what's likely to happen to these two men who committed a terrible crime, a terrible crime.

"But the position of Australia is that we abhor drug crime but we abhor the death penalty as well, which we think is beneath a country like Indonesia."

Indonesia resumed executions in 2013 after a five-year moratorium. (Sky News)