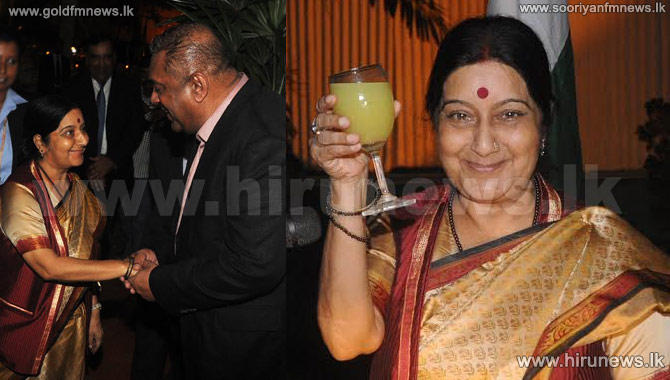 During the talks held with President Maithripala Sirisena last evening, Indian Foreign Affairs Minister stated that ties between India and Sri Lanka will be strengthened further following the tours of the state leaders of the two countries.

She added that Sri Lanka is a significant country for her, especially since her parliamentary seat situated in Madya Pradesh houses the sacred grounds of Sanchi, the hometown of Arhat Mahinda Thera who introduced Buddhism to Sri Lanka.

Foreign Affairs Minister Mangala Samaraweera enlightened his Indian counterpart regarding the new government’s initiatives including the 100 day plan and the steps taken to improve reconciliation in the country.

The Hindu newspaper, carrying an article regarding the talks held between the 2 Ministers stated that the talks focused on re-launching a ferry service between Sri Lanka and India.

Following the meeting, TNA MP Selwam Adaikalanadan stated that he has enlightened the Indian Foreign Affairs Minister regarding the importance of providing an immediate solution to the fishermen’s issue.

While holding talks with the Sri Lankan President this morning, the Japanese Foreign Affairs Minister stated that Sri Lanka is a special friend of Japan.

The two ministers held talks regarding several key matters including the freedom of media as well as means to improve bilateral relations.