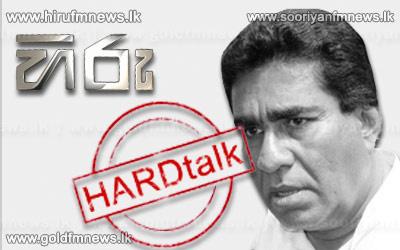 Former Minister of Public Relations and Public Affairs Dr. Mervyn Silva is known as a controversial character, yet numerous appreciated his statements since people discovered him as a 'Looney Politician'.

After President Maithripala Sirisena assigned the throne, Minister Mervyn Silva became ‘Mervyn Silva’ or ‘Parliamentarian Mervyn Silva.’ And he lodged a complaint to the Criminal Investigation Department (CID) demanding to commence an investigation of the murder of prominent Journalist and Sunday Leader Editor Lasantha Wickramathunga during Mahinda Rajapaksa regime.

So, the Former Minister Dr. Mervyn Silva is questioned directly by Hard Talk this week.