Interdict Central Bank governor and hand over investigations to CID 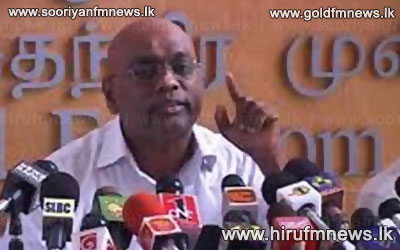 Different opinions were expressed at several media briefings held in Colombo today with regard to the favoritism that has allegedly be given to the 30-year Treasury bond issue auctioned last month.

The NFF says that Central Bank Governor Arjuna Mahendran should be interdicted before an inquiry is made with regard to this transaction.

Addressing the media NFF politburo member Piyasiri Wijenayake said the investigation in connection with this transaction should be handed over to the CID.

The JVP has decided to complain to the Commission to Investigate Bribery or Corruption with regard to this Treasury bond transaction.

Policy Planning and Economic Affairs Deputy Minister Dr. Harsha de Silva said that the government decided to hold an inquiry as charges have been made against this transaction.

The particular Treasury bond issue was auctioned on 27th of last month in order to obtain one billion rupees.

When our news team enquired about these charges, Policy Planning and Economic Affairs Deputy Minister Dr. Harsha de Silva said that this matter would be treated as serious and investigations would be led accordingly.