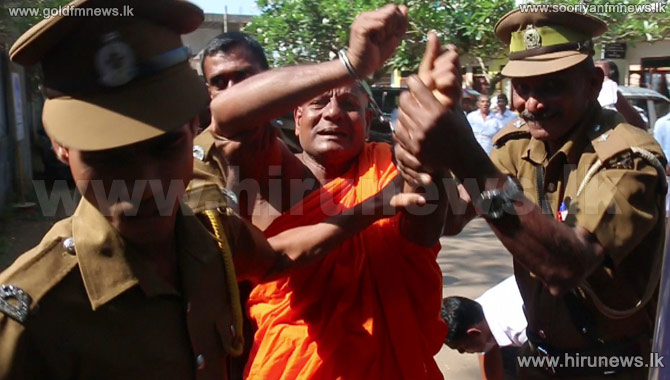 Sinhare Sumanarathana Thera of Polonnaruwa who is in remand for possessing a grenade has behaved in an unruly manner at the Chilaw Magistrate Court premises today.

The Thera shouted that it was unfair to keep him in remand prison nearly for 4 years.

Acting on a complaint by residents of Kokkawila, Chilaw police arrested Sumanarathana Thera and produced him before Chilaw Magistrate on January 4th of 2012.

Later Sumanarathna Thera who was released on bail came out from the Court room and wielded a grenade shouting that his arrest for theft was a plot.

Later the Thera was remanded again under the Offensive Weapons Ordinance after prison guards produced him before the Magistrate.

The Chilaw Magistrate has remanded the Thera again and again since 2012 as no bail application was submitted for the Thera at each time of the case was taken for hearing.

Chilaw Magistrate Shivantha Manchanayake remanded Sumanarathana Thera today too, until 21st of April when the monk was produced before the court.