Update : Modi insists on 13th or beyond 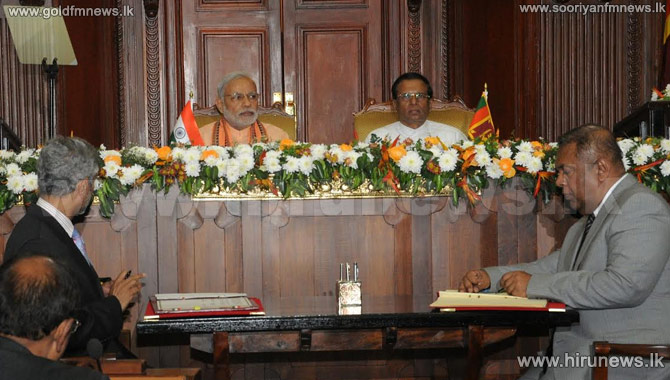 India expects early and full implementation of 13th amendment and go beyond that to find a solution within United Sri Lanka soon, Indian Prime Minister (PM) Narendra Modi emphasized this while speaking at Maha Bodhi Society short while ago.

Bilateral talks between leaders of Sri Lanka and India begin.


4 Agreements were signed between Sri Lanka and India after bilateral talks held between the leaders of the two countries.

The first agreement signed at the Presidential Secretariat was to offer visa-free entry for all diplomats and other official visitors to both countries.

Another MoU was signed between the two countries on customs cooperation.

The third MoU was on Youth Affairs while the 4th agreement to set up Ravindranath Thagore Memorial Hall at Ruhuna University.

The Indian Prime Minister Narendra Modi arrived in the country at 20 minutes past 5 o’clock in this morning.

On his arrival at the Bandaranayake International Airport, Premier Modi was receipted by Prime Minister Ranil Wickremesinghe.

Later the state welcome ceremony for the Indian Premier started at 9.30 at the Presidential Secretariat.

President Maithreepala Sirisena who welcomed Indian Premier Narendra Modi at the Presidential secretariat, conducted the latter on the Red Carpet to a special dais.

After the national anthems of the two countries were played, a 21 gun salute was fired in honor of the visiting Indian premier.

Later the government ministers including Premier Ranil Wickremesinghe and other government officials were introduced to visiting Indian Premier Narendra Modi.

After bilateral discussions and signing of agreements, Sri Lankan President addressed the gathering.

Free On Arrival Visa for Sri Lankans to India

Free On Arrival Visa for Sri Lankans to India