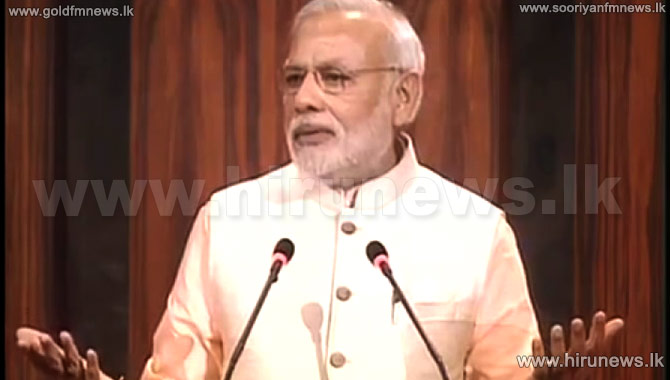 On his arrival at the Bandaranayake International Airport, Indian Premier Modi was welcomed by Prime Minister Ranil Wickremesinghe.

Later the state welcome ceremony for the Indian Premier commenced at 9.30 am at the Presidential Secretariat.

President Maithripala Sirisena who welcomed Indian Premier Narendra Modi at the Presidential Secretariat, escorted the premier along the Red Carpet to a special podium.

After the national anthems of the two countries were played, a gun salute was held in honour of the Indian Premier.

Following the bilateral discussions between the two state leaders, 4 MOUs were signed.

Indian Premier today reiterated their stand for the implementation of the 13th Amendment to the Constitution and aiming for a united Sri Lanka for all communities.

In addition, the Indian oil company, Lanka IOC and Ceylon Petroleum Corporation have agreed to jointly develop the Upper Tank Farm of the China Bay Installation in Trincomalee on mutually agreed terms.

A Joint Task Force will be constituted soon to work out the modalities.


“Sri Lanka is one of our closest neighbors and a nation with which we share so much. I am truly honored by your warm welcome and friendship,” visiting Indian Premier Narendra Modi stated while speaking to Sri Lankan Parliament short while ago.

Indian Prime Minister was warmly welcomed by the current Speaker of the Parliament Chamalka Rajapakse.

This is how it should be between neighbor states. We should meet regularly. It supports us to understand each other better, find solution to mutual concerns with mutual respect and move our friendship forward.”

That is what we achieved in my meeting with Sri Lankan President Maithripala Sirisena today,” he said, delivering a speech at the Parliament.