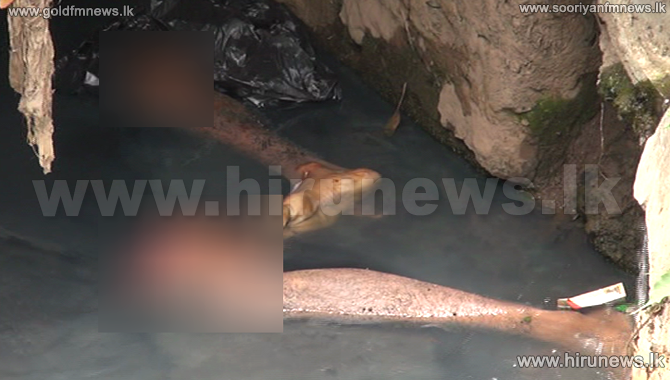 Police stated that they have discovered a set of keys lying next to the two severed human legs found in a canal near Siridhamma Mawatha in Dematagoda.

Police found the dismembered limbs following a tip off received by the Dematagoda Police.

Investigations have revealed that the legs belong to a male person.

The severed limbs have been sent to the Colombo National Hospital Mortuary to conduct the postmortem.

According to the Police media spokesman’s office, it is suspected that a person or a group of persons have tossed the severed legs into the canal last night.

Police further said that the legs have been severed 6 inches above the knee.

Several Police teams commenced investigations this morning, with the help of the Police Kennel Division.

However, accurate details regarding the severed legs have not been uncovered thus far.

Police media spokesman’s office stated that investigations are currently underway regarding the case.

Two Human Legs found in a Canal in Dematagoda

Police found two amputated human legs from a canal at Siridhamma Mavatha in Dematagoda this morning, the Police stated.

Police Spokesperson Assistant Superintendent of Police (ASP) Ruwan Gunasekara stated the two legs had been amputated about six inches above the knee. The police suspected that the legs must have been dumped there last night.

Dematagoda police are investigating in this regard.