Tambuttegama residents protest against a race by race 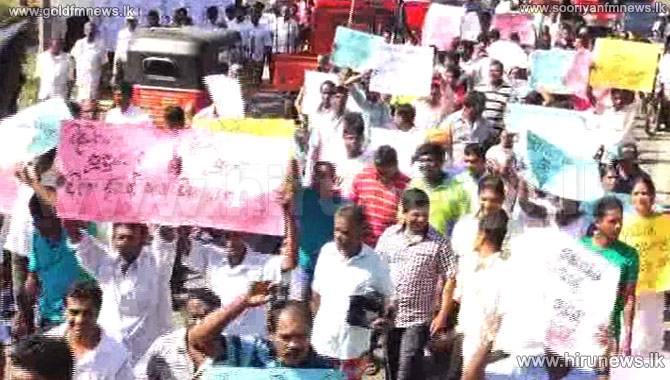 Tambuttegama residents led by the Sangha staged a protest against a race by race centre yesterday.

Traffic was obstructed on the main Anuradhapura – Kurunegala road for nearly two hours due to this.

This protest began from the centre of the Tambuttegama town last forenoon.

The vendor community, public organizations and a large number of residents participated in the protest.

The agitators marched to the relevant race by race betting centre situated at the Tambuttegama Queen Junction.

However the betting centre concerned remained temporarily closed on that occasion.

The agitators said that they had protested against this on several occasions.

They pointed out that the temporarily closed betting centre would be opened again.

Subsequently the agitators were engaged in the protest blocking the main Anuradhapura – Kurunegala Road at the Queen Junction.

Afterwards the police arrived at the site of the agitation.

On this occasion in consequence of the police obtaining the driving licence of a three-wheel driver who participated in the agitation, the agitators protested against it vehemently.

On this occasion OIC Tambuttegama Police, ASP Paraakrama Ekanaayake arrived at the site and provided a solution to the problem.

Similarly after the Talaawa Divisional Secretary also came to the site and gave a written pledge to take action for the removal of the race by race betting centre, the agitators dispersed.