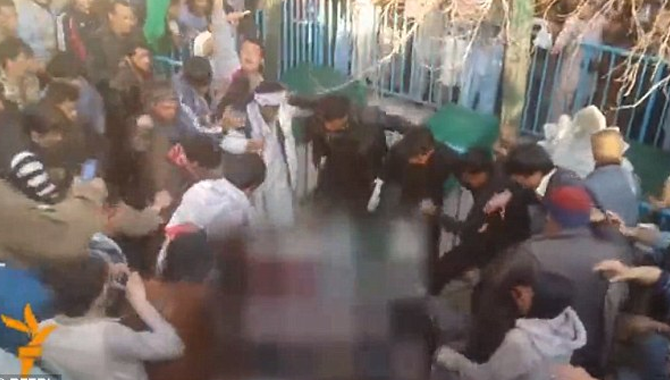 A woman who reportedly burned a copy of the Koran inside a riverside shrine in the Afghan capital was surrounded by an angry crowd, set ablaze and dumped into the chilly waters Thursday evening in a startling act of mob violence.

The parents of the 27-year-old woman, who died in the attack, told authorities her name was Farkhunda and that she suffered from mental illness, said Farid Afzal, head of investigations for Kabul police.

Police were still investigating the incident and offered few details, but said they had arrested four suspects. Witnesses said that a huge throng of people had gathered at the scene to watch, some scaling the walls alongside the river, others climbing to the roofs of multi-colored stalls lining the streets of the crowded outdoor market where the Shah-Do Shamshira shrine sits.

“They broke the railing above the shrine itself, that's how strong they were,” said Shah Jahan, a shopkeeper, who estimated the crowd was in the thousands. “You couldn’t see past the people.”

It was not immediately clear how many people carried out the attack, or whether a crowd egged on the woman’s assailants, but it was believed to be the first time that someone in Afghanistan had been killed for burning a copy of the Muslim holy book.

In 2012, after U.S. personnel inadvertently burned copies of the Koran at the sprawling Bagram air base north of Kabul, deadly protests erupted in several cities, underscoring the depth of anger felt by many Afghans against coalition forces stationed in the country.

The two-story, pale yellow Shah-Do Shamshira mosque is a highly trafficked architectural and religious landmark at the edge of the Kabul River in the center of the capital.

Few details were immediately available about the woman or the alleged Koran burning, but Afghan and foreign health professionals believe that a large proportion of the Afghan population suffers from some sort of psychological trauma after three decades of conflict. The government’s own health surveys suggest that two-thirds of Afghans suffer from psychological disorders in a country where such conditions are rarely acknowledged, and even less often treated.

Abdul Wahed, who works in a store next to the shrine, decried the killing.

“Before you can take action you have to know what happened,” the 30-year-old said. “Did she have psychological issues? Only when you know that can you take action.

“You have to abide by both sets of laws. She should have been subject to the laws of the state and of God.”

Wahed said he had a hard time accepting that a Muslim would knowingly burn the holy book.

“We have no shortage of enemies,” he said. “How do we know there weren’t outside forces influencing her?” (Daily Mail)