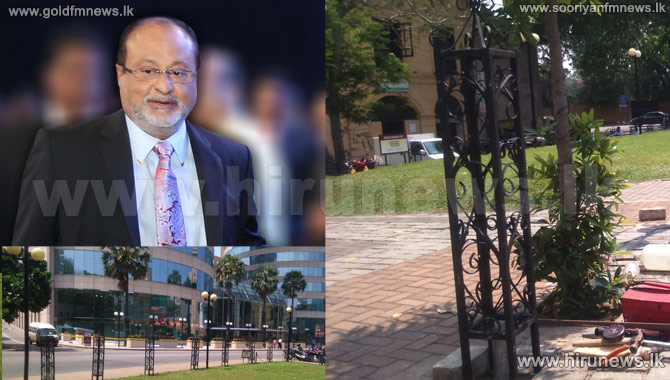 The Urban Development authority’s Water resource and Water Supply Secretary Karunasena Hettiarachchi has stated that the Capital Maharaja Group has no legal rights to forcefully fence the said property belonging to the UDA.

This property previously was declared as a High Security Zone (HSZ).

Neither the public nor any authority was allowed to enter these premises, and no developmental work could be carried out in this particular zone.

However, after the end of War this premises was open to the public and several development projects was initiated.

This premises with lawn was maintained by the Urban Development Authority.

Today morning a certain Private Company claiming that this property belongs to them and started to construct a modern type of a fence.

The land in extent of 65 purchases opposite the WTC at Colombo Fort which was functioning under the UDA (State Property) was tried by a certain group to fence the land by force was opposed by surrounding institutions as well.

However, the Colombo City Hotel Managing Director Gamini Mathew who claims that the maintenance of this particular property is being carried out by them and states  the history of this unlawful forceful entry made by a certain element.

"…this was a land full of dirt, in 2010 UDA came to me and asked that to whom this land belongs? I told that to my knowledge this land belongs to the Capital Maharaja Group. Although, it belongs to the capital Maharaja Group this land was not in proper order. It was in a pathetic condition with full of dirt. The UDA officials told to me that the Sri Lanka Army would take over this land, as it belongs to the government. And the UDA officials told me that they would maintain this premises to a good standard and they requested for my cooperation as well to put up lights to brighten this area in the dark hours. We water this land, we cut the grasses and cleaned up the area was maintaining at a good standard. Then one day a group of individuals came to the land and started to measure it. Soon I informed the UDA officials that a group of individuals has come to measure the land and put up a fence, and I inquired from the UDA officials whether they do not have the rights on this land. Then I learnt that they had lodged an entry. Then on one Friday again that group of individuals came on a truck and started to erect fence. Then the Police interfered and advised them to remove the fence and take it away…"

"…I learnt to know that this contact has been given to a private company by the Capital Maharaja Group. The heart of Colombo City is opposite the WTC, so a work of this nature at this kind of a place is a crime to the nation…"

The Media personals and the labours that were at this point of erecting the fence had the following dialogue.

-          (Workers) No. We were given a contract, this land belongs to Capital Maharaja Group and that’s all we know (they point at a person and says that this man was the security guard for last 10 years)

Labours then stepped away.

However, when inquired from the Police Media Spokesperson Assistant Superintendent of Police (ASP) Ruwan Gunasekara, he stated that according to the entry lodged by the UDA that this particular land is being maintained and functioned under the UDA.

"…Two weeks prior to this incident also there are entries being lodged in this regard by the UDA. The UDA states that this premises is functioning under their authority. Therefore, the UDA opposes this erection of a fence to this particular property. However, today when this private company arrived at this premises to put up the fence surrounding this land the second entry was lodged. The Police have instructed to stop this particular act till Monday…."

When the Hiru news inquired from the UDA’s Water Resource and Water Supply Ministry Secretary Karunasena Hettiarachchi, he stated the UDA’s stance in this regard as follows…

Now in our country Good Governance has been established. Therefore, any individual or institution can verify their rights on any issue.

Question – According to the available information this land truly belongs to whom?

Answer – This land belongs to the UDA. We say that It belongs to us. If somebody claims that it belongs to them, the only place they could verify their lawful right is the courts.

On this issue we tried our best to contact the chairman of Capital Maharaja Group Mr. Rajendran Rajamahendran over the phone was unsuccessful as he did not respond.