Pilot was locked out of cockpit before crash? 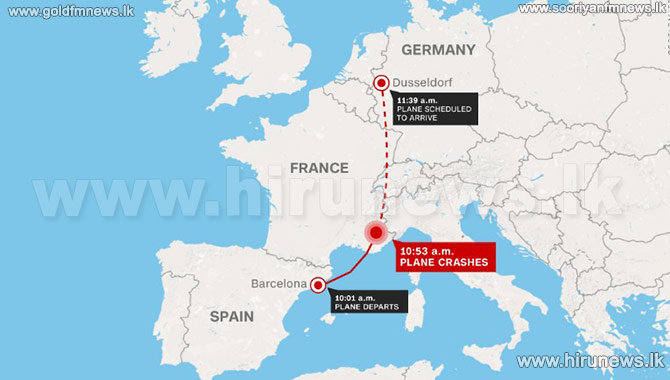 One of the pilots on board Germanwings Flight 9525 was locked out of the cockpit when the plane crashed, citing evidence from the cockpit voice recorder.

Helicopters have airlifted some victims' remains from the site of the Germanwings plane crash in the French Alps, the Gendarmerie said yesterday.

Investigators trying to determine what caused the crash of Germanwings Flight 9525 have made a startling discovery in an audio recording, according to a New York Times report: One of the plane's pilots was locked out of the cockpit before the crash. "You can hear he is trying to smash the door down," a senior military official involved in the investigation told the newspaper, describing audio from the cockpit voice recorder, one of the plane's black boxes.

"We don't know yet the reason why one of the guys went out," the official said. "But what is sure is that at the very end of the flight, the other pilot is alone and does not open the door."

Lufthansa, the parent company of Germanwings, said it was looking into the report.

"We have no information from the bodies investigating the incident that would corroborate the report in the New York Times," spokesman Boris Ogursky said. "We will not participate in speculation, but we will follow up on the matter." The Times' report is a "terribly shocking revelation," CNN aviation analyst Peter Goelz said. But he and other experts cautioned that it's still unclear what could have been going on inside the cockpit.

Possibilities range from a medical emergency to something more nefarious, like a suicide mission, CNN aviation analysts said.

Officials previously said that hadn't ruled out terrorism, but it seems unlikely.

French authorities revealed earlier Wednesday that they'd been able to access audio from the recorder, even though its external casing was damaged.

But they disclosed few details about what the recording actually contained, saying only that there was one audio channel with voices on it that went all the way up to the time of the crash.

"It is too early to draw conclusions to what happened," said Remi Jouty, head of the BEA, the French aviation investigative arm leading the probe. "There is going to be detailed work performed on that audio file to understand and interpret the sounds and the voices that can be heard."

Finding the plane's second black box will also be critical to understanding the mystery of what went on inside the jet.

That box, the flight data recorder, hasn't been found yet, but Lufthansa CEO Carsten Spohr said Wednesday that there's a high probability it will be.

Investigators scoured dangerous terrain in the French Alps as they searched for clues in the wreckage.

Workers dropped to the crash site from helicopters, Jouty said, and had to be tied together because the steep area in the mountains is so treacherous.
'We need to understand what happened' Spohr said Tuesday's plane crash "represents the darkest hours" in the history of his company, which owns Germanwings.

Officials are struggling to understand how an airplane that "was in perfect technical condition" with two experienced pilots "was involved in such a terrible accident," he said. But even worse, he said, is seeing the heartbreak of the relatives and friends of the victims who perished in the crash.

"What they have gone through is, of course, incomprehensible," he said, describing what he said was an emotional meeting between the relatives and airline executives Wednesday. And now, he said, the company's focus will be taking care of them.

Special Lufthansa flights will take relatives and friends of victims to southern France on Thursday, so they can be near the search scene, he said. "We need to understand what happened," French President Francois Hollande said. "We owe that to the families."

The doomed flight was traveling from Barcelona, Spain, to Dusseldorf, Germany, when it crashed Tuesday in the French Alps.

Germanwings said the plane reached its cruising altitude of 38,000 feet, and then dropped for about eight minutes. The plane lost contact with French radar at a height of about 6,000 feet. Then it crashed.

There were 150 people from 18 countries on board.

Mother, daughter from Virginia among the victims

Teams have begun the daunting task of identifying the victims' bodies, but caution that it could take time to complete.

Clues in the debris

Investigators are still trying to piece together what caused the crash.

Jouty, the head of the investigation team, said the debris suggests the plane hit the ground and then broke apart, instead of exploding in flight.

Radar followed the plane "virtually to the point of impact" in the Alps in southern France, Jouty said. The flight's last altitude recorded by radar was just over 6,000 feet.

FBI agents based in France, Germany and Spain are looking through intelligence sources and cross referencing the passenger manifest of Germanwings Flight 9525, two senior law enforcement officials said. So far, their search hasn't turned up anything that "stands out" or anything linking the passengers to criminal activity, according to one official.