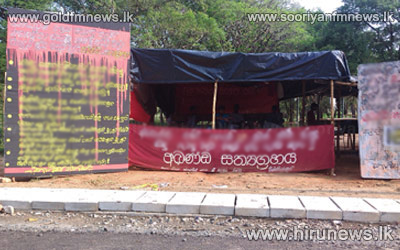 The Satyagraha staged by the Open University Students which commenced in front of Nawala Open University based on several demands, including the reduction of course fees, marks 100 days today.

In conjunction with the Satyagraha, the students’ Collective staged a protest today, in front of the University Grants Commission in Ward Place Colombo.

Later, talks were held between the UGC authorities and the student representatives.

Following the discussion, the convenor of Open University students collective Amila Sandaruwan stated that the authorities could not provide a solution to their issues.