Couple stoned to death for having Pre-marital sex 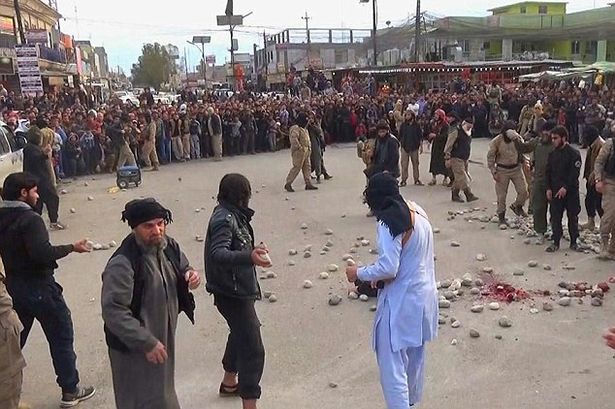 ISIS jihadis accused the couple of having sex without being married

Gruesome new images have emerged showing Islamic State militants stoning a blindfolded and bound man and woman to death in Iraq after they were accused of having sex before marriage.

Taken in the ISIS-stronghold of Mosul in Nineveh province, the shocking images show a large crowd gathered to watch the jihadis murder the defenceless couple.

Young boys clamber onto their fathers' shoulders to get a better view of the man and woman being charged with 'fornication', before the familiar white-bearded face of ISIS's elderly Mosul-based executioner-in-chief Abu Ansar al-Ansari orders their stoning to death.

The sickening images begin by showing a large crowd gathered in a rain-drenched square in central Mosul.

With heavily armed militants taking up positions on ledges overlooking the crowd, the young men and boys jostle to ensure they get the best view of the murder

In the background of the image, women wearing black niqabs are seen gathered together.

An Islamic State militant with a yellow scarf covering his face is then seen using a microphone and PA system to read out the charge of 'fornication' against the couple, suggesting they have been accused of having sex without being married, not of committing adultery.

A large pile of stones are then seen heaped in the middle of the road, before the barbaric ISIS militants began throwing them at the defenceless and blindfolded couple, who have had their hands bound to prevent them getting away.

As stones rain down on the victims' bodies, large pools of blood appear in the road, before eventually the man and woman die of their injuries and the savagery finally comes to an end.

The images emerged as Iran's Revolutionary Guard this morning said a U.S. drone strike killed two of its advisers in Iraq, though the U.S. said it has only struck militants in its campaign against ISIS.

The claim came as negotiators attempted to reach a deal on Iran's contested nuclear program, which hard-liners in the Islamic Republic have opposed as giving away too much to the West.

The Guard said on its sepahnews.ir website the strike happened March 23, just after the U.S.-led coalition began airstrikes to support Iraqi forces trying to retake the Islamic State-held city of Tikrit.

It identified the dead as Ali Yazdani and Hadi Jafari, saying they were buried yesterday. It called them advisers, without elaborating on whether Iran contacted Iraqi or U.S. forces after the strike.

Iran occasionally reports on the death of its forces in Iraq and Syria, where it is backing embattled President Bashar Assad, but this is the first time Iran has said it has lost forces in an attack by the U.S. in those campaigns. (Daily Mail)