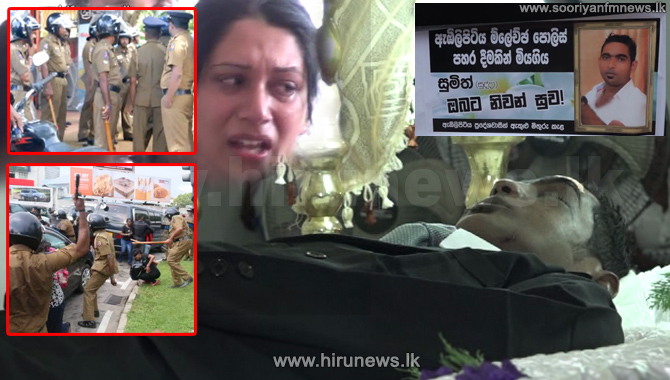 Twenty nine year old Sumith Prasanna Jayawardene succumbed to his injuries in a clash between Police officers of Embilipitiya Police Station and civilians at a party he has attended on 4th January.

Many witnesses including victim's wife said the police went on the rampage after party organizers refused to give them alcohol, assaulted the gathering and pushed the victim from the second-floor.

At this point, the secretary of the Bar Association of Sri Lanka, Ajith Pathirana claimed that arresting the suspects doesn’t grant the justice.

However, no policeman was seized even by six days after the Court order.

Attorney-at-Law Udul Premaratne accused the IGP for providing an unusual support and security to the ASP who had been ordered to be arrested, but was transferred to Narahenpita traffic division attached to the Police HQ instead.

Following the IGP’s failure to respect the Court order and arrest the policemen who have been accused in the Embilipitiya fatal clash, a group of lawyers sent a letter of demand to him on 30th January.

After updating the Acting Attorney General, Attorney Udul Premarathna noted that the lethargy in adhering to the Court order cracks public’s faith on the Police.

Thus, Attorney Premarathna warned the Police that a legal case will be filed at a relevant Court for ignoring court order, failure to respect the court and violating the respect of government service and police service, unless the accused will be remanded within 24 hours.

Many law experts highly criticized the IGP’s partial conduct towards accused policemen claiming that such actions humiliate the law of the country.

A writ of mandamus was therefore filed before the Court of Appeal on 1st February, against the IGP by the attorneys-at-law in support of the victim’s family of Embilipitiya

Meanwhile, Police Media Spokesperson, ASP Ruwan Gunasekera continued to state that the CID prolonged their investigations upon the advice of the Attorney General regarding the issue, and therefore appropriate measures would be taken at right time.

After all the hard work of the lawyers of the aggrieved party and continuous vigilance of media, former Embilipitiya ASP D.W.C. Dharmaratne was arrested and remanded until 17th February on 02nd and 03rd of this month, respectively.

However, D.W.C. Dharmaratne is not admitted at the Prison’s hospital, like any other politically and police backed-up prisoner.

Moreover, Police’s irresponsible investigations related to Seya Sadewmi case and false accusations that defamed two innocent individuals in that case make Sri Lankas question about Police’s duty and service to the country and its citizens.

Lethargy of the IGP and his Police towards Hirunika Premachandra’s involvement to abduct a youth in Dematagoda in bright day light along with brutal attacks to student protest also added nothing but black marks to Sri Lanka Police.

In an 'imaginary' Sri Lanka, the Police "Righteously protect those who abide by the Law", as per their 'righteous' motto because the IGP who has the power and authority to protect innocent and punish wrong neglects court orders and protects the suspects while his own Police staff commits crimes and goes missing.

Scroll down to see few videos on Embilipitiya incident…