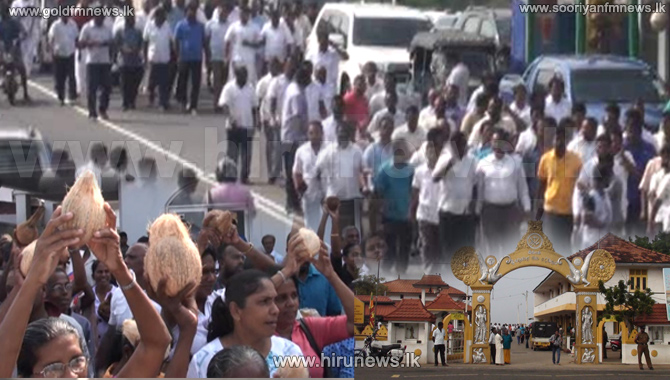 The Joint Opposition conducted a ritual of dashing coconuts at Seenigama Devala premises today, with the intention of praying to gods to dissolve the Financial Crimes Investigation Division.

According to our correspondent, parliamentarians of the Joint Opposition, Southern provincial councillors as well as the residents of the area took part in the ritual.

Attending the event, MP Mahinda Yapa Abeywardena stated that they are conducting the ritual against the government’s un-democratic actions.

Meanwhile, the Patriotic National Front staged a protest march in Ambalangoda to protest against the ritual conducted by the Joint Opposition.

The march proceeded from Ambalangoda Railway station to Ambalangoda Bus stand, where they addressed the people and staged a protest.

Later when they tried to approach Seenigama Devalaya, the protestors were prevented by ASP of Ambalangoda, saying that they cannot reach the premises under the court orders.

Our correspondent stated that they dispersed following the decision.