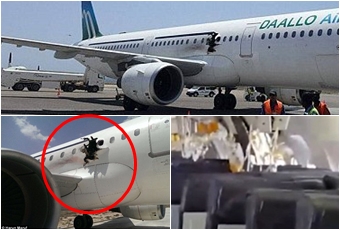 The bomb that blew up a Somalian Daallo Airlines plane was well hidden in a laptop, Somali officials say.

The plane made an emergency landing, last week, after the blast that killed a man who is identified as Abdullahi Abdisalam Borle and believed to be a terrorist. Borle was sucked out of the plane due to the explosion.

Security camera footages at the Mogadishu airport shows two men disguised as employees handing over a package (the laptop) to Borle before he boarded the plane.

Reports also say that 20 men alleged to be linked with the incident were arrested.