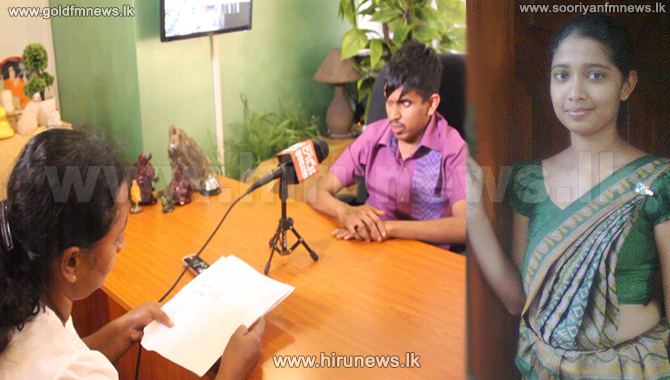 Mayomi’s mother mainly needed to inquire the chances for her daughter to be among living and get a clue about her whereabouts. According to Totawatta, the reading was an experiment reading to predict the life or death, which should be done after a detailed and deeper reading of the horoscope.

The victim’s mother explained the incident in a broken voice.

By the time of the mysterious abduction, Mayomi Sanjeewani was a student of Nilwala teaching College, Akuressa. On the unfortunate day, she had left the home to go to Hakmana town to buy a jacket piece.

In brief, Mayomi has had a relationship with a guy with six years and they were to get married with parental blessings of both parties. But another guy has expressed his feelings for her and intended to start a love affair with her.

Mayomi has met the second boy in Hakmana town when she went to shop for her need. That boy has called Mayomi’s mother and informed that he dropped her at her bus stop. Yet, Mayomi had not made it to home even by 7.30 pm. The mother has therefore called this boy and demanded him to send her daughter. Meanwhile, she has also called and informed her daughter’s groom-to-be that Mayomi didn’t come home and requested help to find her.

The guy who was after Mayomi had reached her house immediately while the groom-to-be who has stated that he would check in friends’ houses had only arrived after 10.30 pm.

Mayomi’s mother mainly suspected the new guy for abducting her daughter. However, 20 days after the mysterious missing, the groom-to-be has confessed the Police that he called Mayomi and asked her to get down after the other guy had dropped her to get the bus home. He has also revealed that he took her to Matara and Mayomi jumped into the sea in Matara. Yet, on another day the same guy has told that he took Mayomi home and handed over to mother after meeting her that day.

Though the guy has stated different stories, the police has surprisingly arrested Mayomi’s mother without any inspection and kept her in remand custody for three months. According to the mother she has only received bail after the CID intervened into the investigations.

However, the court cases go on based on the second statement of Mayomi’s groom-to-be.

Meanwhile, a police officer has told Mayomi’s mother that Mayomi is no more among the living according to evidence they found. Mayomi was murdered by a person on the day she went missing and her body was cremated in a crematorium in the area. The policeman has further explained that Police stopped intervening into the investigations after the case was handed over to the CID.

Since no solid evidence proves that her child is dead, the motherly love is searching for her daughter all around the country and seeks justice for herself and her daughter.

She questions the police for their lethargy and injustice to them and pleads the President and the Prime Minister to intervene into this case and stimulate the Police and CID to find her daughter and grant her justice.

However, the famous astrologist Indika Totawatta who made several accurate political predictions in recent past made some revelations about Mayomi’s destiny based on her horoscope.