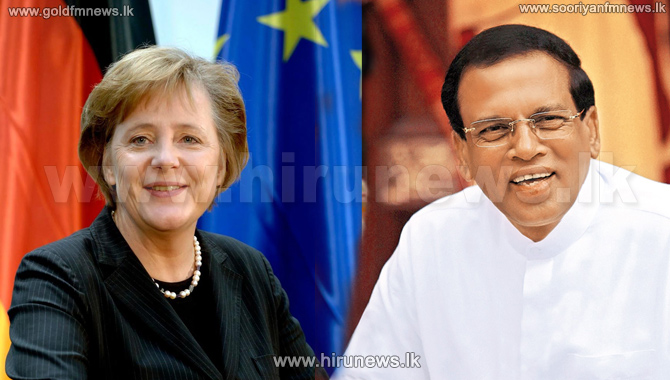 German Chancellor Dr. Anjela Merkel assured to send a high level business delegation including the Economic Affairs Minister of Germany to seek about the opportunities to improve economic investments and trade relations between Germany and Sri Lanka.

She made these remarks when she met President Maithripala Sirisena yesterday (Feb. 17) at the Office of the German Chancellor.

The President who arrived in the Federal Chancellor’s Office was received by the German Leader. A Guard of Honour was also held to welcome President Sirisena, who is on a 3-day state visit to Germany. After the Guard of Honour, two national anthems were played.

Subsequently, the Chancellor Merkel and President Sirisena started bilateral discussions. The discussion was focused on strengthening of bilateral relations of the two countries. The special attention was paid on promoting of the economic and trade activities between Germany and Sri Lanka.

Dr. Merkel expressing her satisfaction about the reconciliation process in Sri Lanka stated she heard that the people both in the South and the North are living contentedly. She also pledged the assistance of the Government of Germany for the welfare of the northern people. The German chancellor expressed her willingness to grant funds for the improvement of fields of vocational training and renewable energy in Sri Lanka.

Commenting on the ban imposed on Sri Lankan fish exports to Europe, Dr. Merkel said a committee has been appointed to investigate that matter. She said the actions will be taken according to the report by the committee.

When President Sirisena requested the assistance to regain the GSP+ to Sri Lanka, the German Chancellor said she would seek for the possibility over that.

The President invited the German Chancellor to make a visit to Sri Lanka and she accepted the invitation.