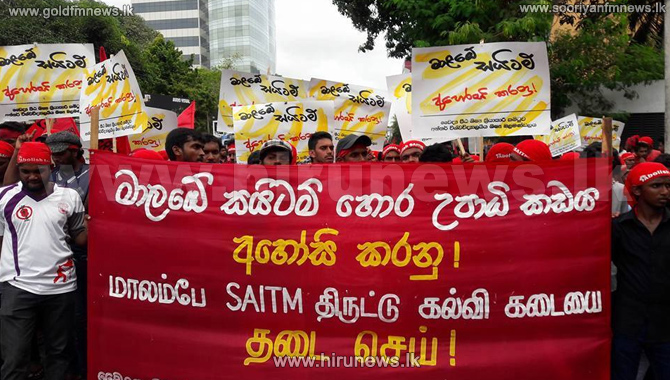 Police fired tear gas and water cannon on a group of university students who protested against SAITEM at Colpetty and another group of cricket fans who pelted stones at the police today.

Inter University Students Federation together with several other students associations engaged in a protest march demanding the termination of Malabe Private Medical College.  The protest started from Sri Jayewardenepura University and was marched towards Colombo on High-level Road.  Heavy traffic reported along High-level Road due to the protest march this afternoon.

Meanwhile Mirihana police obtained a Court order from Colombo Fort Magistrate but protesting students did not accept the Court ruling. The Court had ordered the protesting students to continue their march by resorting to minimal inconvenience to the public.

The protestors entered Galle Road from the Thummulla junction and continued towards Colombo. Later police fired tear gas and water cannons at the protestors as they attempted to march towards Temple Trees by clearing police barriers.

Meanwhile, a group of cricket fans staged a protest in Dambulla today, complaining that they did not get tickets to watch the 4th One Day international to be played between Sri Lanka and Australia in Dambulla.

The protestors blocked the Dambulla -Kurunegala main road.  Our correspondent stated that the protestors pelted stones at the police when police reached the scene.