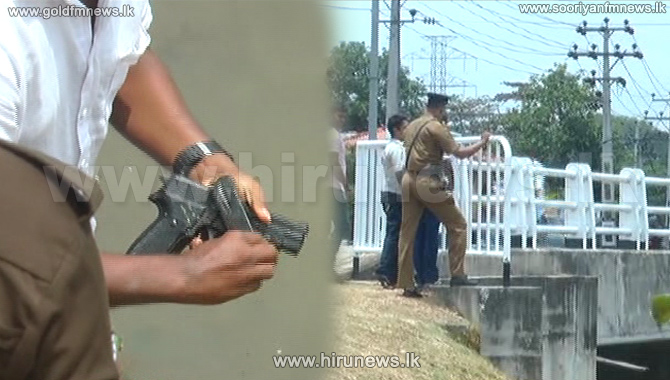 Police have initiated investigations to the second firearm believed to have been thrown into the Diyawanna Oya by the army colonel after shooting his wife in Isurupura Malabe.

Police are investigating how the accused acquired the additional weapon.

The suspect confessed to the police that he has disposed this pistol in Diyawanna Oya, along with the other pistol which was by him to shoot at his wife.

Navy divers retrieved the second weapon this afternoon and found its serial number being removed.

The China Micro Pistol is not used by Sri Lanka police or the security forces therefore the investigators believe that it had been used by the LTTE.

Earlier, Navy divers retrieved the Micro pistol from Diyawanna Oya which was used by the suspect in the shooting.

The wife of accused army colonel was shot in her residence on August 27th.

The suspected Colonel was remanded until September 9th when he was produced before Kaduwela Magistrate yesterday.

Sri Lanka Army has suspended the accused Colonel from the service.

Meanwhile, a spokesman from the Colombo National Hospital told our news team that the victim has undergone three surgeries, and her condition has not returned to normalcy.