Both parties can move forward together on behalf of the country: says the President; ‘Proceed without contemplating the past’: Requests the Prime Minister 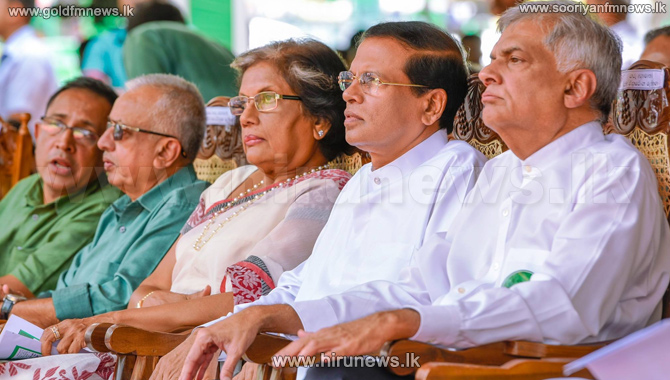 The UNP’s 70th Anniversary Convention was held under the theme ‘come forth to progress in a new country’, at the Borella Campbell grounds in Colombo today.

The ceremony was held under the patronage of party leader Prime Minister Ranil Wickremesinghe.

The convention was held with the participation of leaders of all religions, parliamentarians as well as a large number of party supporters.

Prime Minister Ranil Wickremesinghe inquired the stance of the party supporters with regard to the proposals and announced that the proposals were passed unanimously.

Meanwhile, a special memento including an image of the founder of SLFP S.W.R.D. Bandaranaike was presented to the Chief Guest of the ceremony President Maithripala Sirisena by the Premier to mark the 70th anniversary of the party.

Addressing the ceremony, Minister Kabir Hashim noted that the aim of the UNP is to act as a party which respects its policies by evolving to suit the requirements of the country.

Later President Maithripala Sirisena addressed the gathering, stating that SLFP and the UNP will be able to work in collaboration towards building a unitary nation.