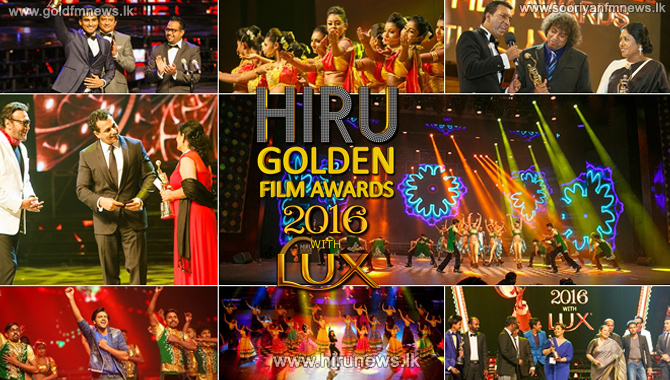 The biggest awarding ceremony ever to be organized in the history of Sri Lankan Cinema, Hiru Golden Film Awards 2016, concluded last night after awarding the title of Best film to the film - ‘Ho Gaana Pokuna’.

Sarath Kothalawala and Kaushalya Fernando were crowned with the Best Actor and Best Actress awards respectively.

The Hiru Golden Film Awards 2016, held with the participation of leading local and foreign artistes including many Bollywood superstars, commenced the ceremony by presenting two special Jury awards.

Bollywood Superstar Karishma Kapoor and veteran actress Yashodha Wimaladharma were called upon the stage to present these awards.

Bollywood star Neil Nitin Mukesh together with veteran actress Geetha Kumarasinghe entered the stage to present the awards for the best visual effects.

Bollywood Superstar Madhuri Dixit who later entered the stage with a fascinating dance performance, presented the award of the ‘Upcoming Actress of the Year’ to Dinakshi Priyasad.

Meanwhile, Hemal Ranasinghe won the title for the ‘Upcoming Actor of the Year’ award in addition to claiming the title of Hiru Golden Film Award for the Most Popular Actor.

Udari Perera was awarded with the Most Popular Actress award at the Hiru golden films awards night.

Jackie Shroff the legendary actor from Bollywood cinema who contributed his inimitable talent in over 200 films entered the stage with the stalwart cinema icon Dharmasena Pathiraja to award another significant award.

Doctor Ravindra Randeniya who elevated the local cinema to new heights was awarded with the Once in a Life time Award during the Hiru golden film awards night.

In addition, D. B. Nihalsinghe was posthumously honoured with the top Golden Award.

Sarath Kotalawala of the film “Thanhaa – Rathi – Ragaa” won the award as the year’s best actor.

Tissa Suendra of the film “Ho Gaanaa Pokuna” won the award for the best editing.