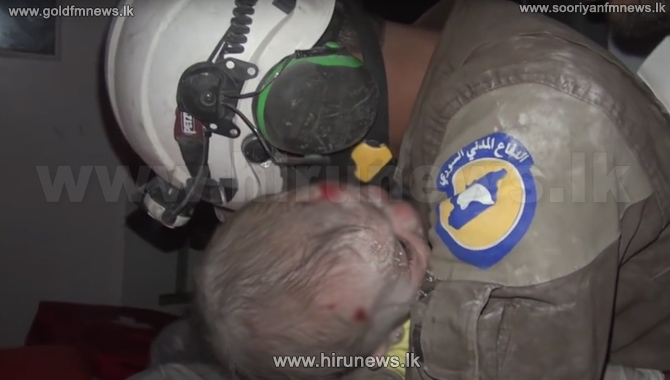 A rescue worker in Syria broke into tears as he rescued a baby from a building destroyed by airstrikes.

After an hours-long operation in Idlib in the northwestern part of Syria, members of the Syrian Civil Defense were able to pull out a baby girl and a woman alive from under the rubble of a building on Thursday.

In an emotional video, the rescue worker cries as he embraces the baby. He says in the video that the baby had been under the rubble for about two hours but didn't have any wounds.

“Oh God, oh God,” he says between sobs in a video released by the Syrian Civil Defense, known as the White Helmets, a group of unarmed, nonpartisan rescue workers in Syria.

“Thank God, she doesn’t have one wound, no wounds at all," the rescue worker says in the video. "Thank God. When I carried her I felt like she was my daughter. The guys and I, the team that worked with me, we were three or four who took her out and then I carried her on my own and brought her to the hospital. I felt like she was my daughter. I hugged her tight. She moved me deeply.”

The rescue workers said that the baby was on the fourth floor of the building when airstrikes hit.

Airstrikes over Idlib killed at least six people including four children and an elderly man on Thursday, according to the Syrian Observatory for Human Rights.