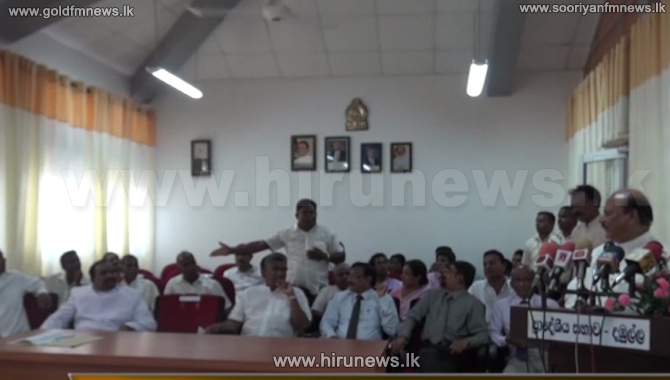 A tense situation arose during the opening ceremony of the Dambulla Pradeshiya Sabha new building.

This was with regard to not providing the former chairman of the Dambulla Pradeshiya Sabha with an opportunity to address the gathering and the absence of the names of the urrent president and former president on the commemorative plaque.

The new building constructed at a cost of 50 million rupees was opened this morning under the patronage of Minister of Provincial council and local government Faizer Mustafa and Chief minister of the central province, Sarath Ekanayake.

Following the opening ceremony of commemorative plaque and the ribbon cutting ceremony marking the ceremonial opening of the new building, the invitees engaged in an inspection tour.

During the ceremony Chief minister of the central province, Sarath Ekanayake noted that the ceremony had to be cut short due to the subject Minister Faizer Mustafa having to attend to a matter which needed his immediate attention.

Former Chairman of the Dambulla Pradeshiya Sabha K.G Somathilaka who stood up immediately stated that he was disappointed that he was not given the opportunity to address the gathering regardless of his effort and hard work to initiate the construction.

As a result of the incident, the invited former chairmen caused an uproar.