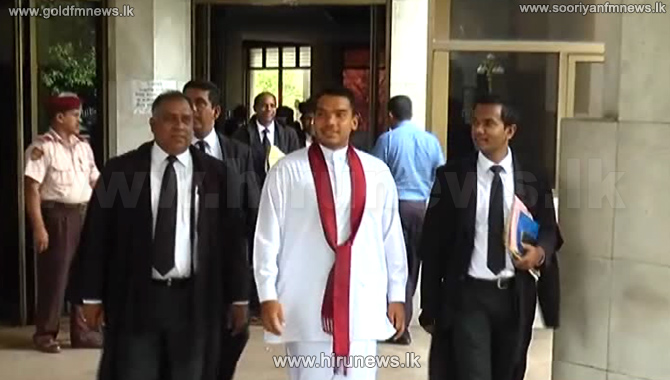 MP Namal Rajapaksa has filed a Case with the Colombo District Court seeking a compensation of Rs. 200 million from the FCID.

The defamation Case has been filed for arresting and remanding him without conducting a proper investigation with regard to the Krrish developer’s transaction.

Meanwhile, MP Lohan Ratwatte reported to the FCID at 10 am this morning to record a statement with regard to a financial misappropriation committed in the construction of the Diyagama Mahinda Rajapaksa Stadium.

In addition, Basil Rajapaksa and former IGP Mahinda Balasuriya also appeared before the The Presidential Commission of Inquiry to Investigate and Inquire into Serious Acts of Fraud and Corruption this morning.

Basil Rajapksa was summoned before the Commission to record a statement with regard to a financial misappropriation taken place at the Upcountry Development Authority.

Meanwhile, Mahinda Balasuriya was summoned by the Commission to record a statement with regard to incurring a Rs. 30 million loss to the government by providing an armed police contingent for several members of the National Freedom Front.