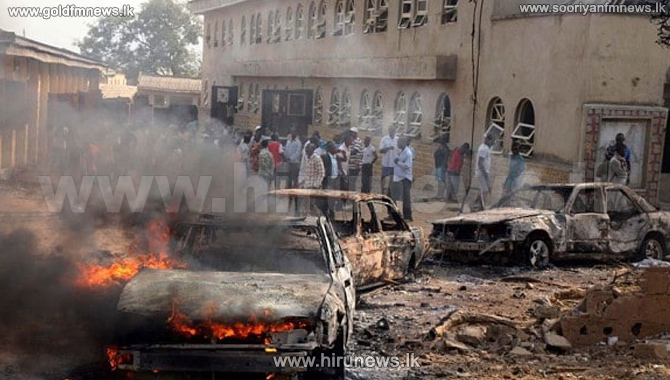 An explosion targeted a passenger-filled taxi in northeastern Nigeria's largest city on Wednesday, killing eight people in the deadliest bombing there in several months, officials said.

The National Emergency Management Agency said in a statement that 15 people had been hospitalized with injuries.

No one immediately claimed responsibility for the blast.

The blast occurred as the taxi approached a gas station in the outskirts of Maiduguri. The bodies of victims were sprawled on the ground next to the bombed-out vehicle as officials inspected the area.

It was unclear if a bomb had been planted in the taxi or if a passenger detonated explosives.

"Security has been beefed up at the scene of the explosion," the emergency agency's statement said.

Northeastern Nigeria is the epicenter of the Boko Haram extremist group's seven-year uprising that has claimed more than 20,000 lives. Maiduguri city had been spared deadly bombings in recent months as soldiers were able to shoot suicide attackers before they reached their targets.

President Muhammadu Buhari recently painted an optimistic picture of the military campaign against Boko Haram. In a speech on Oct. 1 marking the anniversary of the country's independence from Britain, he said the insurgent group "was defeated" in December and that residents of the northeast enjoyed "relative safety" as they went about their daily lives.

"Commuters can travel between cities, towns and villages without fear," the president said.