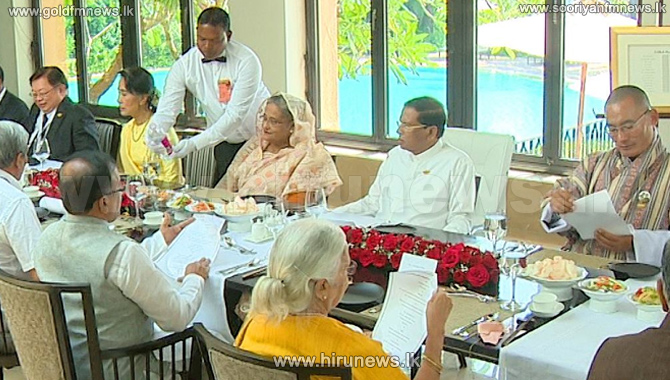 The President who met Indian Prime Minister Narendra Modi, expressed his thanks for the invitation, and noted that it would consolidate the perennial relations between the two countries.

Indian Premier also noted that he invites Sri Lanka to deepen its relations with India, beyond norms and regulations.

He also stated that the arrival of Sri Lankan President for the summit confer strength to the entire region.

Meanwhile, Prime Minister of Nepal Pushpa Kamal Dahal stated that he is grateful for the contribution made by Sri Lanka for the development of Nepalese Buddhist temples.

Nepalese premier noted this after meeting the Sri Lankan President.

President Maithripala Sirisena also stated that it would be possible to hold the SAARC state leaders’ summit without further ado, and stressed that all SAARC countries should cooperate to realize the matter.

During the meeting, Bhutan Premier has stated that he expects Sri Lanka’s support in developing Buddhist education in Bhutan.

She praised the transformation of democracy taking place in Sri Lanka, and expressed her wishes to donate an elephant calf to the Temple of the Sacred Tooth Relic in Kandy.

President Maithripala Sirisena is expected to meet several other state leaders including the President of China.