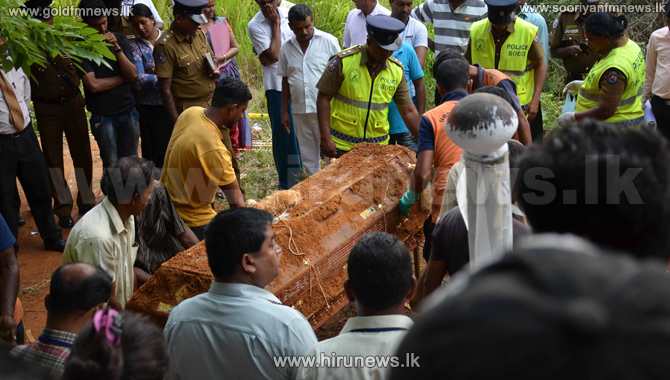 Three days after the burial, the body of the retired army intelligence officer who committed suicide after claiming that he was responsible for the murder of journalist Lasantha Wickramatunga was exhumed today.

Following a court order issued by Mt.Lavinia Magistrate Mohamed Sahabdeen, the body was exhumed before Kegalle Magistrate Gihan Meehagage. A team of CID officials were also present at the exhumation in the Puwak-deniya public cemetery in Karandupona.

The body of the 52-year old retired army intelligence officer Ilandarige Edirisinghe Jayamanne was found in the early hours of October 14th. A suicide note addressed to the intelligence unit was found in the vicinity.  The deceased had claimed responsibility of Lasantha Wickramatunga’s murder and therefore had asked authorities to release his friend Malinda Udalagama.

Late Jayamanne had joined the army in 1985 and, he was serving as a sergeant major attached to the army intelligence unit at the time of his retirement in 2007.

Lasantha Wickramatunga was murdered in January 2009 and, CID has been investigating Wickramatunga’s murder as well.

Hiru News found that a team of intelligence officers were dispatched to Kegalle to carry out the work.

Former intelligence officer, Illandarige Jayamanne, a father-of-three, committed suicide by hanging after writing a letter confessing to the murder on Friday (14).