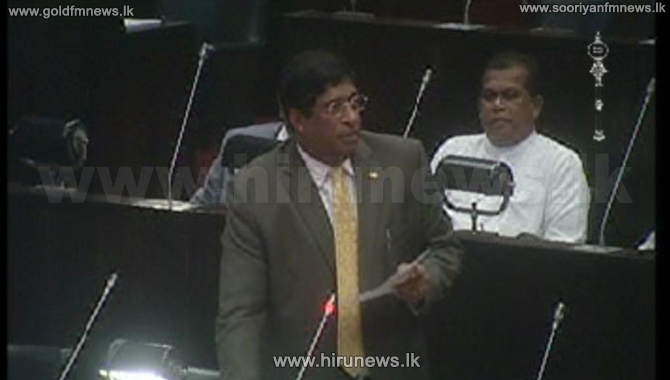 The Appropriation Bill for next year was presented to parliament today.

Finance Minsiter Ravi Karunanayake presented the relevant appropriation bill pertaining to the 2017 Fiscal year, and it is considered as the first budget reading.

In comparison to the government expenditure of the previous budget, there is a reduction of Rs. 122 billion in the budget for next year.

However, the allocation for the President has increased by Rs. 4.06 billion against the previous Rs. 2.39 billion.

The total allocation for the President for next year has been billed as Rs. 6.45 billion.

In addition, Rs. 5.76 billion has been allocated for the Mahaweli Development and Environment Ministry which is also coming under the purview of the President.

Furthermore, the Ministry of National Integration and Reconciliation was allocated a sum of Rs. 1.83 billion.

Meanwhile, Rs. 1.23 billion have been allocated for the Prime Minister.

In comparison to the previous year’s allocation for the Premier, an increment of Rs. 770 million can be observed this year.

In addition, National Policy and Economic Affairs Ministry which also comes under the purview of the Prime Minister, has been allocated Rs. 12.5 billion.

Meanwhile, the highest appropriation has been allocated for the National Defence in the next year’s budget as well, which amounts to Rs. 284 billion.

Rs. 251 billion out of the total Defence appropriation has been billed for recurrent expenditure.

The second biggest allocation has been made for the Ministry of Finance and the Finance Ministry has been allocated a sum of Rs. 242.2 billion.

In addition, Rs. 160.9 billion was allocated for the Health and Indigenous Medicine Ministry.

Meanwhile, it is significant that the allocation for the Education Ministry has been reduced by 41% in comparison to its allocations in the previous budget.

Education Ministry has been allocated only Rs. 76.9 billion in the budget for next year.

In addition, Rs. 163.4 billion has been allocated for High Education and Highways Ministry.

Meanwhile, the lowest allocation was made to the minister of Special Assignment Sarath Amunugama’s ministry, and the allocation amounts to Rs. 110 million.

The second time budget reading by the Finance Minister will take place on the 10th of November, and the Budget is expected to be taken up for debate on the 10th of December.