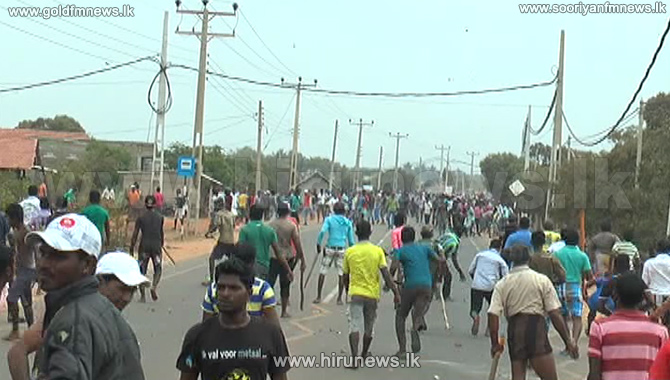 The clash which occurred between two groups of fishermen in Kurungnanpitiya has been brought under control.

Police and STF have been deployed to maintain law and order in the area.

Police said the mob set eight motor boats, three motor cycles and a lorry on fire during the clash.

Meanwhile, seven persons who sustained injuries in the clash were admitted to the Kalpitiya district hospital.

However a clash intensified after the fishermen allegedly using illegal fishing gear, objected to the protest.

A tense situation erupted when the two groups confronted at Kurungnanpitiya at 10.30 this morning.

Police in the area were compelled to call the STF to quell the clash.

Later, the mob was dispersed by the police with the assistance of the religious leaders in the area.

In the meantime, the Puttalam Magistrate issued a restraining order preventing protestors blocking the main road.

Meanwhile, the two groups of fishermen were called for a special discussion with the subject minister in Negombo this afternoon.

However, our correspondent stated that only the representatives of the fishermen who objected the usage of illegal fishing gear were present at the meeting with the minister.