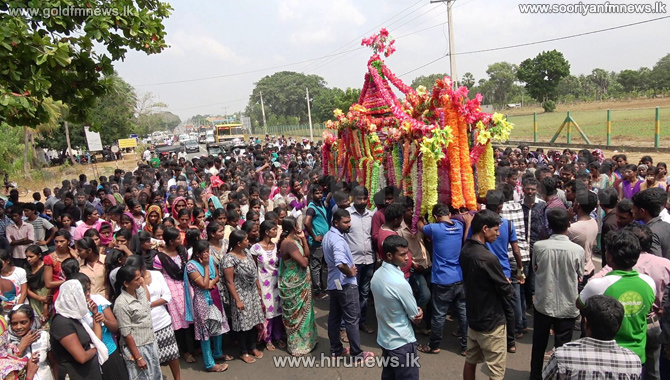 The final rites of Nadaraja Gajan - one of the two Jaffna university students who died in Kokkuvil, Jaffna, was conducted today.

The funeral took place at Iranamadu public cemetery in Kilinochchi.

The remains of the late student were brought from his residence at Baradipuram in Iranamadu to the public cemetery in a procession.

It was reported that the A-9 road was obstructed for one hour, due to this reason.

A large gathering participated in the funeral of the Jaffna university student including MPs and provincial councillors of TNA.

Reports indicated that the participants carried black flags, banners and posters in the procession.

Our correspondent noted that a special police protection was not provided for the funeral procession.

Two Jaffna University students who were travelling in a motor cycle at high speed were stopped by a group of police officers at a check point in Kokkuvil, Jaffna on the 21st of this month.

It was also reported that the students did not pull over, ignoring the police orders, which led to the shooting incident.

Meanwhile, a meeting of Tamil political party leaders is currently held in Jaffna with regard to the death of the two Jaffna University students.