Jaffna University students protest in front of the District secretariat 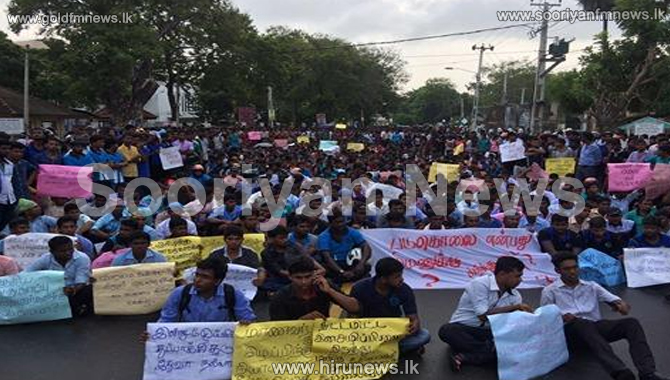 Our area correspondent noted that the university students blocked the entrance of the Jaffna Divisional Secretariat engaging in the protest displaying placards.

As a result, transportation along the Colombo- Jaffna A9 road was disrupted.

A document was handed over by the university students to the Northern Province Governor’s office and Divisional Secretariat following the protest.

The inter-university students federation noted that protests have been organized against the incident in front the Universities of Sri Jayewardenepura, Kelaniya, Peradeniya and Rajarata.

Tamil political parties have decided to launch a hartal movement in the Northern Province against the incident.

Meanwhile, Socialist People’s Front convening a media briefing in Colombo today, expressed their views regarding the death of the two students.

The General Secretary, Raja Kolluray noted that the police have exceeded their authoritative discretion.