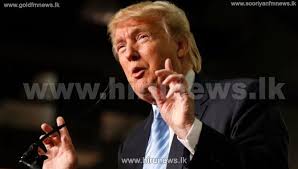 He said the US should focus on defeating the so-called Islamic State rather than convincing Syrian President Bashar al-Assad to stand down.

Clinton has been proposing a no-fly zone over Syria, which some say could lead to conflict with Russian jets.

The Republican also criticised his Democratic rival's plan to control Syrian air space saying that they are going to end up in World War Three over Syria if they listen to Hillary Clinton.