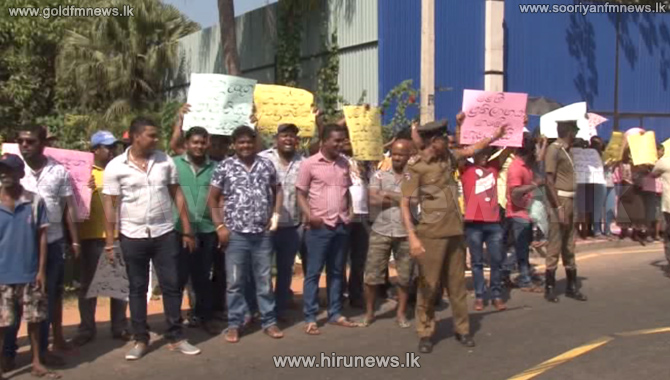 A tense situation erupted today at Dandugama area in Ja Ela during a protest consenting and opposing the filling of a marshy land.

However, protestors stated that land filling activities still continue despite the orders issued by the president.

The protestors who are in favour of filling the land strongly opposed the deputy minister Ranjan Ramanayake when he arrived at the scene.

In the past few days, residents in the area expressed their disapproval regarding the unauthorized land filling of this marshy land which is a part of Muthurajawela wetlands.

When officials from the Land Reclamation and Development Corporation and the Central Environmental Authority visited the site to investigate into the matter, the land owners denied granting permission for the officials to enter the site who then accessed the site through another entrance with the help of the Police.

Speaking to media after investigating the site, Chairman of the Central Environmental Authority, Professor Lal Mervin Dharmasiri stated that the land filling activities taking place are not authorized.

However, at the protest today, residents in the area stated that land filling activities continued even after the officials left the premises.

Protestors who are in favour of filling the land threw water at deputy minister Ranjan Ramanayake when he arrived at the scene.

Furthermore, vehicle movement along the Negombo – Colombo main road was hampered in the morning due to the protest.